GWEN IFILL: It's an all-too- familiar story, in a new setting. This time, the city of Charlotte is on edge, awaiting a second night of protests over the police killing of a black man.

The drama began with a Tuesday confrontation that sparked a night of trouble.

WILLIAM BRANGHAM: Within hours of the fatal shooting, protests boiled over in North Carolina's largest city. The victim was 43-year-old Keith Lamont Scott.

And his sister, who didn't give her name, said he was unarmed.

WILLIAM BRANGHAM: Another woman, claiming to be Scott's daughter, went on Facebook, saying he'd had a book, not a gun, and also had an unspecified disability.

In short order, a crowd blocked traffic on Interstate 85, throwing rocks, and destroying police cars. Some looted a tractor-trailer and set it on fire. Others broke into a nearby Wal-Mart. Police eventually used tear gas to quell the violence, but 16 officers were injured.

This morning, police chief Kerr Putney urged people to step back and be calm. 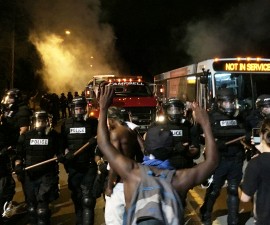 KERR PUTNEY, Charlotte Police Chief: It's time to change the narrative, because I can tell you from the facts that the story is a little bit different as to how it's been portrayed so far, especially through social media.

WILLIAM BRANGHAM: As Putney told it, officers had been at an apartment complex, searching for a suspect, when they saw Scott get out of a car. They say he did have a gun, and refused to put it down.

KERR PUTNEY: In spite of the verbal commands, Mr. Scott, as I said, exited his vehicle armed with a handgun, as the officers continued to yell at him to drop it. He stepped out, posing a threat to the officers, and officer Brentley Vinson subsequently fired his weapon, striking the subject.

WILLIAM BRANGHAM: The officer, who is also black, was placed on administrative leave, which is standard procedure in such cases.

Meanwhile, local activists and ministers called for an economic boycott of Charlotte.

JOHN BARNETT, Civil Rights Activist: Across the country, we are being shot down, shot down. Very few cops go to jail for that.

WILLIAM BRANGHAM: And by late this afternoon, protests were starting up again. This incident came just a day after graphic video from Tulsa, Oklahoma, that showed an officer shooting an unarmed black man.