JUDY WOODRUFF: In the race to the White House, the candidates are taking different approaches in the final days leading up to the first debate.

JOHN YANG: This morning, Donald Trump offered his take on the unrest that has gripped Charlotte the past two nights.

DONALD TRUMP (R), Presidential Nominee: The people who will suffer the most as a result of these riots are law-abiding African-American residents who live in these communities where the crime is so rampant.

Drugs are a very, very big factor in what you're watching on television at night.

JOHN YANG: He said his tough law and order agenda, which now includes backing stop and frisk, a practice a federal judge said discriminated against minorities, would benefit black Americans. 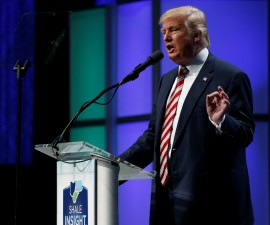 JOHN YANG: World peace with was the topic of a letter from 75 retired career diplomats slamming Trump as entirely unqualified to serve as president. Most of the diplomats who signed the letter haven't been publicly associated with politics.

Meanwhile, a Politico analysis of campaign finance reports found that the Trump campaign has paid Trump's businesses $8.2 million. That's about 7 percent of the campaign's total spending.

SEN. TIM KAINE (D-Va), Vice Presidential Nominee: Where we see challenges all over the country, challenges of gulfs and gaps that exist between communities and law enforcement, we have got to put them on the table. They're not easy, but we can do that with a calm and peaceful spirit.