Scientists are trying to get humans to Mars. Researchers from the U.S. space agency NASA are currently trying to find out what kind of plants could grow in the red soil on Mars. They hope that astronauts will be able to start growing their own food on the Red Planet. The journey to Mars could take up to two-and-a-half years. The astronauts will need to take a lot of food with them just to last for the journey. They will never be able to return to Earth, which means they will need to grow their own fruit, vegetables and other plants from seeds. NASA said there could be a problem because Mars doesn't have soil that is good for growing things. It just has red dust. 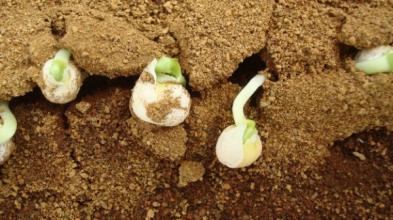 Humans may be on their way to Mars in the next 15 years. NASA has been testing special "Martian gardens" to see what kind of things might grow on Mars. They have used a special soil made up of crushed volcanic rock. It contains no nutrients or organic material, so it is similar to the soil on Mars. The scientists managed to grow lettuce in it. They said the lettuce tasted normal, but it had weaker roots and took longer to grow. They will now try growing other vegetables. A NASA spokesman said: "Discoveries made in these Earth-based 'Martian gardens' will pave the way for future studies and technology development in terms of reliable, efficient food production a long way from Earth."