This is costing Trump support in his own party. According to a "USA Today" survey, about 25 percent of the Republicans serving as governors, U.S. senators and members of the House of Representatives now say they do not support Trump. And according to a "Time Magazine" tally, among female Republicans in office, around 35 percent do not support him.

To discuss the gap within the GOP, I'm joined from Washington by Jonathan Swan, a national political reporter with "The Hill".

So, how significant is this rift?

JONATHAN SWAN, NATIONAL POLITICAL REPORTER, THE HILL: It's about as significant as it can — as imaginable. I mean, this — particularly, in the last few weeks, when Donald Trump and his cohort made a strategic decision to no longer migrate towards the center. I mean, there was sort of a period there where he was at least indicating that he was trying to reach out to some of those undecided voters. Now, there seems to be a strategy to really just double down on the most incendiary rhetoric possible.

HARI SREENIVASAN: So, what happens to all the people that support Trump that no longer see, perhaps, the GOP as their home? 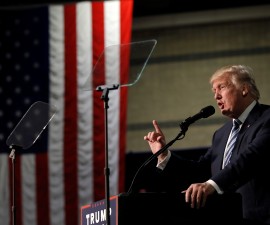 I mean, how do you reconcile the Donald Trump universe, which is the view of Donald Trump and his campaign CEO Steve Bannon, is that Paul Ryan, the Republican speaker of the House, is part of the conspiracy with folks like George Soros and Paul Singer to bring about one-world government, to destroy America through open borders. That's literally their world view.

Steve Bannon has said to his colleagues at "Breitbart" that Paul Ryan is the enemy. How do you reconcile that with Paul Ryan and with the elite wing of the Republican Party that believes in all of these orthodoxies that they've supported for the past 20 years? I don't see how those two things join up.

JONATHAN SWAN: It gets harder. He's going to have a reelection for speaker. He's probably going to have a slimmer majority. I don't believe that the House is going to flip, but they may lose some seats. There's quite a few vulnerable members.

So, Paul Ryan is going to face a more hostile caucus. He is going to have a month of nuclear warfare from the person who has possession of the biggest megaphone in the party. Donald Trump has been savaging Paul Ryan. He's been suggesting there's something sinister going on, that Paul Ryan is masterminding some kind of a plot to undermine him.

HARI SREENIVASAN: All right. Something to keep an eye on.

Jonathan Swan from "The Hill" — thanks for joining us.