The Swedish furniture giant IKEA has banned old people from dating at its store in Shanghai, China. Store managers decided to clamp down on what they described as 'illegal date clubs'. Since the store opened several years ago, hundreds of lonely, divorced or widowed elderly people have descended on the cafeteria in search of love and companionship. Many of them simply used the café as a meeting place and did not buy anything. Management said they occupied seats for 'extended periods,' 'spoke loudly,' 'spat on the floor,' 'flirted' and had 'quarrels and fights'. The store posted a notice saying: "From today, the restaurant will only be for people who purchase their food first." 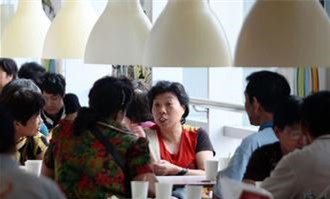 The older clientele are up in arms over the ban. They say they have nowhere else to go. An 88-year-old IKEA regular said: "We've been to McDonald's and KFC, but there are barely any of our peers there. We feel like aliens there - surrounded by youngsters." Another frequent visitor to the restaurant said: "I guess few people know just how lonely old people are. Our kids are not around, and some visit only on weekends. I feel quite good when I come here. I talk with friends, but some elderly do meet people who become lovers." Some customers have little sympathy for those in search of love. They have complained that there is nowhere to sit because of the matchmaking groups.