HARI SREENIVASAN: With 13 days to go, the presidential campaign ran the gamut today, from rallies to ribbon-cutting.

HILLARY CLINTON (D), Presidential Nominee: If people get out and vote, we will have a victory on November the 8th.

DONALD TRUMP: My theme today is five words, under budget and ahead of schedule. Today is a metaphor for what we can accomplish for this country.

JOHN YANG: Hillary Clinton campaigning in battleground Florida on her 69th birthday suggesting a darker side to Trump's ribbon-cutting.

HILLARY CLINTON: He relied on undocumented workers to make his project cheaper. And most of the products in the rooms were made overseas.

JOHN YANG: Others are getting in on the campaign combat, too. 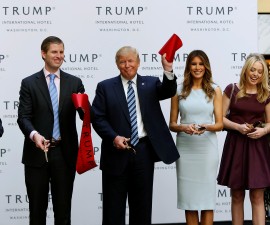 FORMER REP. NEWT GINGRICH, Former speaker of the House: I'm sick and tired of people like you using language that is inflammatory that is not true.

MEGYN KELLY, FOX News: Excuse me, Mr. Speaker. You have no idea whether it's true or not. What we know is that…

NEWT GINGRICH: Hillary Clinton in a secret speech in Brazil to a bank that pays her $225,000 saying her dream is an open border, where 600 million people could come to America, that's not worth covering?

MEGYN KELLY: That is worth covering, and we did.

NEWT GINGRICH: And you want to go back through the tapes on your show recently? You are fascinated with sex, and you don't care about public policy.

JOHN YANG: And after Vice President Biden said he'd like to take Trump behind the high school gym, Trump said bring it on.

As the candidates drive to the finish, Republicans are saying promised there would be no honeymoon if Clinton wins the White House and the GOP holds the House. Oversight Committee Chairman Jason Chaffetz told The Washington Post there would be immediate hearings into Clinton's time at the State Department. He said they already have two years' worth of material lined up.

Meanwhile, Donald Trump Jr. told the "NewsHour" that the people he's met during the campaign has him thinking about a political future for himself.

DONALD TRUMP JR.: It'd be an honor to be able to one do that. I think I have got to get my kids through school, and after this, I may need a good 10-year break from politics. But, you know, again, there is a rush to it. I mean, there is something very exciting and very moving and humbling when you are speaking with those people.

JOHN YANG: So, someday, there could be another candidate named Trump.