Many of India's big cities are experiencing such hazardous air pollution that it almost defies belief. The standard measurement for healthy, normal, breathable air is set at a level of 50 according to the Air Quality Index (AQI). A level of 300 means the air is hazardous to breathe. The AQI website says 300 represents a health alert and the city should be put under emergency conditions. The website says that, "everyone may experience more serious health effects". On November 8, the city of Chandrapur in Maharashtra reached an AQI level of 824, to become India's most polluted city. The capital New Delhi has reached an AQI of 724. Environmentalists say many cities are now like "gas chambers". 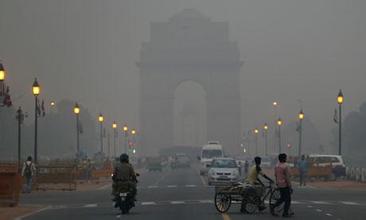 A toxic haze shrouds India's capital and residents are being warned to wear masks. Schools were ordered closed for three days. New Delhi generally has its fair share of pollution problems due to the nine million vehicles that clog its streets, most not conforming to emissions standards. The situation has been made worse recently due to a number of factors. These include chemical pollution blowing in from nearby states, farmers setting fire to straw as autumn arrives, and a lack of wind. To alleviate the crisis, city officials have ordered roads to be doused with water to stop dust from rising. They have also banned diesel-powered electricity generators for 10 days, except at hospitals and cellphone towers.