HARI SREENIVASAN: Often, the people a president surrounds himself with says something about his goals as any policy statement.

President-elect Trump is in the process of deciding who will fill critical national security and diplomatic posts. These decisions will shape the direction of his presidency and the country.

For more on who's in the running for these jobs, and the reaction from allies and others overseas, I'm joined now by "NewsHour" chief foreign affairs correspondent Margaret Warner.

There are a lot of important national security jobs, foreign policy positions. What's the latest?

You have names being raised — for instance, let's take secretary of state. You have John Bolton, the former U.N. ambassador, very kind of aggressive, you would call a neoconservative. Then you have Senator Bob Corker, who is considered sort of middle of the road and conservative. And then you have Rudy Giuliani, of course, the former New York mayor.

A few other names have surfaced, Kelly Ayotte, Nikki Haley, the South Carolina governor. But what troubles those who are really observing this process is there seems to be no rhyme or reason. And what you have got are people who don't share the same views. Some don't share the views that Trump enunciated during the campaign.

Now, the people close to the Trump Organization say, look, we honestly didn't expect to win. So they didn't have a big structure set up, as Hillary Clinton did, with somebody like a former national security adviser in charge of this particular part of the transition.

But I think it is also keeping with the way he ran his campaign, which was kind of free form and competing centers of power. And so then, of course, it's also, finally, the first time he's really having a baptism by fire in managing this chaotic — or, I would say, diverse Republican coalition.

So, you have John McCain lecturing him yesterday about don't get too close to Putin. You have Senator Rand Paul shooting bullets at both Bolton and Giuliani, saying we don't need a hothead in these jobs.

So I think that everybody will settle down once you have got these top jobs filled. 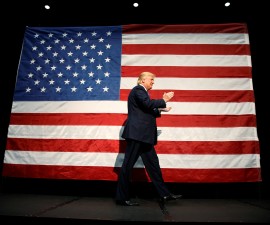 HARI SREENIVASAN: Meanwhile, President Obama overseas trying to reassure the E.U., different countries, that President Trump will honor his commitment to NATO. How do the Europeans see this?

MARGARET WARNER: One ambassador said to me, very reassuring words, but we want to hear them from president-elect Trump.

As you said, President Obama will be meeting with Chancellor Merkel tomorrow. They have private meetings before he goes in meetings with other NATO allies.

What concerns the Europeans deeply are two things that Donald Trump said during the campaign. One was, he questioned the whole relevance of the NATO alliance and in fact some of our alliances overseas, the burden that the United States pays to support them. And he actually suggested that maybe NATO wouldn't come to the rescue some of country if it hadn't been — under Article V if it hadn't been paying its full fair share, which is supposed to be 2 percent of GDP.

And so Wolfgang Ischinger, who used to be the German ambassador here — and I spoke to Ambassador Ischinger late last night — and he said, these are really dangerous times for Europe. We have got the migrant crisis. We have got Britain leaving the E.U. We have got the rise of all these populist nationalist parties with some ugly aspects to them. And if we start to feel that the United States is not really our reliable partner, ally, and anchor, it's going to get worse, then dangerous.

HARI SREENIVASAN: And, finally, what about the relationship between president-elect Trump and Putin? How are Europeans concerned about this?

MARGARET WARNER: That's a big part of it, Hari.

There was actually an interesting little conference call yesterday with two former secretaries general of NATO. And I'm surprised they spoke so bluntly. There is concern that — it didn't go unnoticed that president-elect Trump called Vladimir Putin before he called some NATO leaders, and they are concerned that he will be open to cutting some separate deal with Putin, some sort of trade-off between Syria and the Ukraine, without getting into all the details.

And they said that would really be very, very dangerous. It would send the message that taking — you know, crossing borders and taking territory by force is OK.

HARI SREENIVASAN: Margaret Warner, thanks so much.