New research suggests that soccer players are at risk of brain injury, especially those who head the ball a lot. Researchers in America carried out tests on 38 amateur football players over the age of 30 who had played the sport since childhood. Doctors gave them MRI brain scans and tests to assess their brain function. The players were asked to estimate the number of times they had headed a ball in the past year. The research findings indicate a degree of brain injury not usually present in people who do not play soccer. Doctors reported the condition to be a form of concussion known as mild traumatic brain injury (TBI). This can easily occur in soccer due to the frequent impact of the head with a ball that can travel at speeds close to 100 kph. 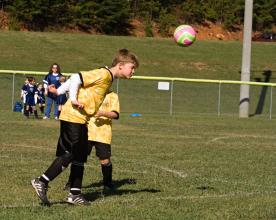 Lead author Doctor Michael Lipton explained the effect heading a ball can have on the brain: “Heading a soccer ball is not an impact of a magnitude that will [cut] nerve fibers in the brain, but repetitive heading may set off a cascade of responses that can lead to a degeneration of brain cells." He added: “Brain injury and cognitive impairment can result from heading a soccer ball with high frequency….These are findings that should be taken into consideration in planning future research to develop approaches to protect soccer players." Doctor Lipton concluded it would be difficult to detect brain injury in children as it takes years of heading a ball for the damage to show up in brain scans.