HARI SREENIVASAN: Today's interest rate hike by the Fed marks just the second time it has raised rates since the 2008 financial crisis and the major recession that followed.

So, when Fed chairwoman Janet Yellen announces a move like that, even one that's widely expected, it is still a big deal.

JEFFREY BROWN: Over the last year, the Fed had signaled several times that a rate hike was imminent, only to back away as economic growth stayed sluggish.

Today, though, the move by the Federal Reserve Board of Governors was unanimous, restarting a move upward from historically low interest rates.

Why now, and what is the Fed seeing?

We turn once again to Diane Swonk, an economist with her own consulting firm in Chicago.

Start there. Why now? What is the Fed seeing?

And the economy — the Fed is sort of looking at things getting stronger, and it's an acknowledgment that the U.S. economy is stronger. It's actually raised rates. I think they could have done it in September. There was this postponement to December. It's more than time for the Fed to raise rates.

And, in fact, I think Janet Yellen also signaled very clearly that this is a turning point for the Fed. They not only — not are we just seeing a forecast of rate hikes next year. I think we're going to see much more than one.

Now, it only takes two to get more than one. I think we will get the three that the Fed is expecting. 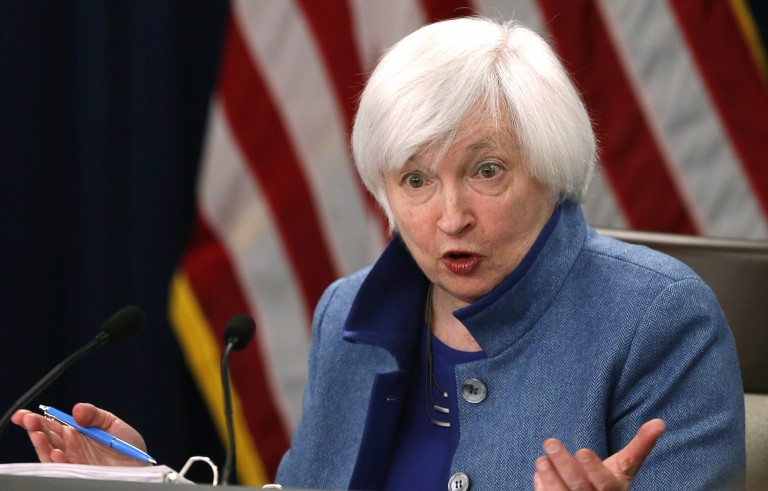 JEFFREY BROWN: They're seeing an economy that is growing, perhaps even too fast, enough that they want to raise rates. That's after an election in which many Americans saw an economy that wasn't growing fast enough for them.

DIANE SWONK: It actually isn't an acknowledgment that the economy is growing too fast.

The monetary policy is still very, very easy. To think of this, you kind of think of it as the Fed is not taking the punch away from the party. They're just not spiking it anymore. They're worried about some people getting a little tipsy on the side, some real estate bubbles they're very concerned about in the commercial real estate market.

And although they didn't state it explicitly, the run-up in the stock market that we have seen since the election has a lot of attributes of a bubble. And there is certainly going to be some concern about that within the circle for the Fed.

JEFFREY BROWN: Well, and, of course, the big question is to what extent does the election of Donald Trump changes the game, right, and changes the economic outlook, and, therefore, the outlook for interest rates, with tax hikes or stimulus.

What did Janet Yellen say about that today?

DIANE SWONK: Well, clearly, there are some within the Fed — there are participants at the meeting that actually did put that into their forecasts. And most of them didn't.

And I think she was very cautious to say the cloud of uncertainty regarding policy, because the Fed is in the situation that they have got to react to actual policy, not promises of policy changes. And the spectrum of what could happen are both bad and good, depending on whether they're protectionist policies that might raise inflation without boosting growth or whether they're pro-stimulus, pro-growth policies that will raise inflation by actually raising growth.

The spectrum is very vague. And we don't have any policies yet to react to. So, I think that's very important. The other issue that's very clear, Chair Yellen made a real attempt to assert the Fed's independence without provoking the new president-elect, because she was really sort of walking on eggshells in an effort to, this is what is expected, this is what we're doing, but didn't want to provoke President-elect Trump, because he did criticize her very much on the campaign trail.

The people they're talking about replacing — putting into two seats in the Federal Reserve that are currently are going to be very hostile to Chair Yellen. And she asserted that, listen, she's not going anywhere. Her term goes until next year.

And she even intimated that she might stick around longer and fulfill her term. We have only had one Fed chair ever that, once they were done with their term as Fed chair, stayed on as governor.

JEFFREY BROWN: He was, indeed, very critical of her. And, as you say, she just has one year.

So, you're thinking there is the possibility here of some kind of coming dispute, open dispute?

DIANE SWONK: I think there's going to be a lot of open dispute.

Now, there may be buyer's remorse later on if they raise rates a lot, and these are people who end up taking over the Fed, because they're going to replace not only two Fed seats. They're also going to have the attempt to replace the chair and replace the vice chair within about a year-and-a-half.

So, President-elect Trump is going to have a lot of impact on the Fed at the same time that Congress is looking to have oversight to be able to make the Fed sort of acquiesce to political cycles, instead of economic cycles.