For the first time, scientists have unlocked the secrets to one of the world's most recognizable and unique, but least understood fish – the seahorse. Researchers have worked out the genetic code of the Southeast Asian tiger tail seahorse. They now have the genetic map of all of its DNA. This means scientists can find out a lot more about this sea creature than before. They can now start to figure out why seahorses are so different to other fish. Unlike other fish, seahorses have no teeth. Another difference is the male brooding of their young - male seahorses carry babies and give birth to them instead of females. In addition, seahorses do not swim horizontally like other fish; they swim vertically (up and down). 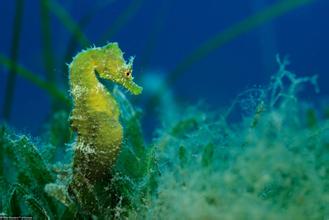 Scientists from Germany’s University of Konstanz and others from China and Singapore helped to sequence the genome of the tiger tail seahorse. A genome is a map of all the genes and genetic information in a cell or organism. Seahorses started to change from other fish about 100 million years ago. They began to take on their unusual shape, which resembles a horse. There is a total of 54 species of seahorse. Its scientific name is Hippocampus. The word 'Hippocampus' comes from the Ancient Greek word hippos meaning 'horse' and kampos meaning 'sea monster'. The word 'seahorse' can also be written as two separate words (sea horse), or hyphenated with a dash between the two words (sea-horse).