Lisa Desjardins has our report.

LISA DESJARDINS: 'Tis the season for charitable giving, but charity has been a long-running and controversial topic for President-elect Trump, one that he reignited last night.

He posted two tweets, staunchly defending the Donald J. Trump Foundation, his private charity, as both generous and efficient. But those tweets ricocheted. Some say they are misleading or plain false.

So what do we know? Let's start with this.

Mr. Trump tweeted: "I gave millions of dollars to DJT Foundation." And he did. Tax filings confirm Mr. Trump and his companies donated $6 million of his own money to the foundation.

DONALD TRUMP (R), President-Elect: I wanted to make this out of the goodness of my heart. 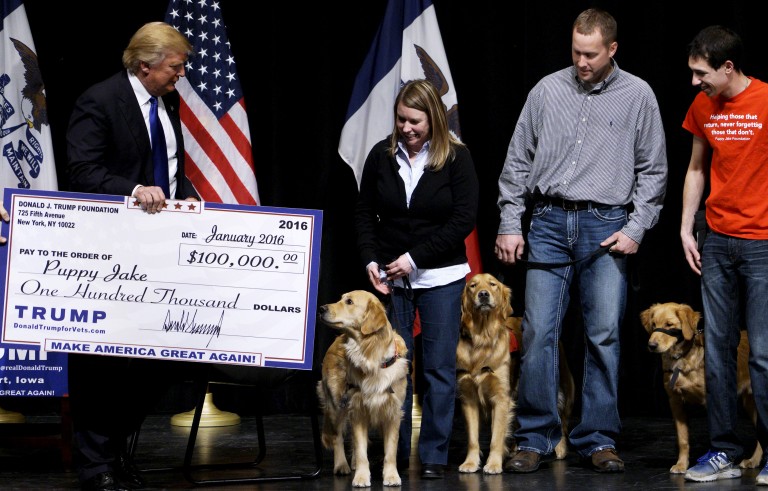 LISA DESJARDINS: But here's the issue: Timing. Tax filings show he donated nothing to the foundation in recent years. Instead, most of the foundation's funding, about $9.5 million, has come from outside donors, including Vince and Linda McMahon, the professional wrestling tycoons. Linda McMahon is now the Trump nominee to head the Small Business Administration. The couple gave $5 million in two years.

Next, this claim from Trump: that all of his foundation money is given to charity. Again, context is critical here. Most of Trump Foundation money did go to nonprofits or charities, but philanthropy may not have been the only motivation. Public documents show foundation funds also went to help settle lawsuits against Mr. Trump, or to political allies, as The Washington Post's David Fahrenthold recently explained to the "NewsHour."

DAVID FAHRENTHOLD, The Washington Post: They gave to this group called And Justice For All, which is a political campaign committee helping Florida Attorney General Pam Bondi, who, at the time, just happened to be considering, her office was considering whether to pursue an investigation against Trump University. They, later on, after the money came in, decided not to pursue that investigation. Trump paid that money out of the Trump Foundation, which is against the law.

That is true. His children serve as the foundation's board, and the foundation is run by the staff of the Trump Organization, his business.

Now, that creates an efficient family charity, but has raised some serious questions. Charities are not supposed to directly benefit or overlap with for-profit businesses like the Trump Organization, and that's one reason the New York state attorney general is investigating the charity.

And all that leads us to what's next for the Trump Foundation. The president-elect has announced he plans to close it. But, legally, he's not allowed to do that until the New York investigation is over.