A new report has found that children of mothers who work are more likely to be overweight. The study says that the more the mother works, the heavier their children could be. The research is from the Institute of Child Health and Human Development in the USA. It looked at data on 990 children related to the number of hours mothers worked and the BMI (Body Mass Index) of their children. The children lived in ten different cities across the USA. Lead researcher Dr. Taryn Morrissey wrote that for every 5.3-month period the mother was employed, her child had a slight increase in BMI over the expected normal weight gain for a child in that age group. She said: "For a child of average height, this is equivalent to a gain in weight of nearly one pound [0.45kg] every five months.” 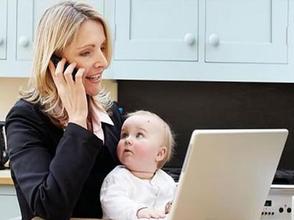 More than 70 per cent of American mothers with young children work. Dr. Morrissey stated she did not want working mothers to be alarmed at the research, saying: “This is not a reason for moms to feel guilty. It’s not maternal employment per se that's the issue. It's an underlying environmental factor that leads to this association." She did not elaborate and say what these factors might be. One for older children could be that they eat too much junk food. Kids in grades five and six are more likely to choose what they eat and therefore have more fast food. One surprising finding in the research was that there was no link between weight gain and changes in the level of physical activity of children whose mothers worked and those whose mothers stayed at home.