HARI SREENIVASAN: Tensions flared again today between the Obama administration and the Israeli government of Prime Minister Benjamin Netanyahu. The verbal fireworks came after the United States abstained from voting on a United Nations Security Council resolution which condemned the continued construction of settlements on the West Bank.

MARGARET WARNER: It was a parting warning shot that pulled no punches:

JOHN KERRY, Secretary of State: Friends need to tell each other the hard truths, and friendships require mutual respect.

MARGARET WARNER: Secretary of State John Kerry today blamed Israel's — quote — "most right-wing government ever" for expanding Jewish settlements into Palestinian areas in a way that will make a two-state solution impossible to achieve.

JOHN KERRY: Here is a fundamental reality: If the choice is one state, Israel can either be Jewish or democratic. It cannot be both. And it won't ever really be at peace.

MARGARET WARNER: That, he said, is why the Obama administration chose not to veto last Friday's U.N. Security Council condemning settlement building.

JOHN KERRY: The vote in the United Nations was about preserving the two-state solution. That's what we were standing up for: Israel's future as a Jewish and democratic state, living side by side in peace and security with its neighbors.

Kerry pointed to the relentless growth of Jewish settlements east of the 1967 border into formerly Palestinian territory of the West Bank captured by Israel in the Six-Day War. There are 270,000 more Jewish settlers in the West Bank today than in the early 1990s, he noted, 100,000 more than when President Obama took office. 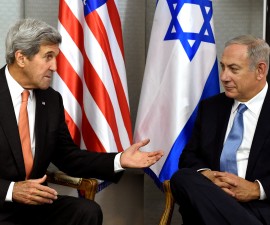 JOHN KERRY: It's not just a question of the overall amount of land available in the West Bank; it's whether the land can be connected or is broken up into small parcels like Swiss cheese that could never constitute a real state.

BENJAMIN NETANYAHU, Prime Minister, Israel: I must express my deep disappointment with the speech today of John Kerry, a speech that was almost as unbalanced as the anti-Israel resolution passed at the U.N. last week.

Today's exchange closes out a rocky eight years between the Obama administration and Netanyahu. This White House has given Israel more military aid than any other. Yet last year Netanyahu went around the White House to try to get Congress to undercut the Iran nuclear deal. Netanyahu is now counting on the next U.S. president.

Last week, President-elect Trump called for the U.S. to veto the U.N. resolution. And before Kerry's speech today, he tweeted: "We cannot continue to let Israel be treated with such total disdain and disrespect. Stay strong Israel. January 20 is fast approaching."

MARGARET WARNER: Mr. Trump has pledged to move the U.S. Embassy from Tel Aviv to Jerusalem. And he plans to nominate David Friedman, a firm supporter of expanding settlements, as U.S. ambassador to Israel.