A group of researchers from Sweden has unlocked one of nature's biggest secrets. The scientists worked out how spiders make such strong silk when they spin their spider webs. The silk that spiders spin is incredibly strong and is tougher than steel. For decades, scientists have been researching what makes the silk so amazing. Finally, researchers from Sweden's University of Agricultural Sciences and the Karolinska Institute have found the answer. They found that the materials for webs are stored in a spider's silk gland as protein. The gland has a level of acidity that helps to make the protein into very strong silk. The researchers copied this process to make enough artificial spider-web silk to stretch for one kilometer. 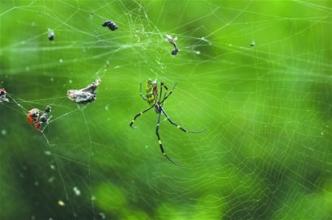 The new artificial silk could be very useful to humans. Doctors are interested in it to use for stitches. They also think it can help the skin recover after a burn. Some doctors believe the new silk could replace torn ligaments in the body. Airplane manufacturers and makers of protective clothing also see many uses for the new silk. Senior researcher Anna Rising spoke about how important the discovery could be. She said: "This is the first successful example of [copying] spider silk spinning. In the future, this may allow industrial production of artificial silk for bio-material applications or for the manufacture of advanced textiles." The silk could become an important new material for us in the future.