Scientists have found out that women who wear high-heel shoes make the calf muscles shorter. The heels also give many women pain in their legs when they take them off and walk. The researchers tested different women aged between 20 and 50 who wore heels that were 5cm or higher. The research, which covered a two-year period, also looked at women who never wore high heels. The research team used ultrasound to measure the length of the fibres in the calf muscles. Their results showed that the muscle fibres of high-heel wearers were 13 per cent shorter than those in the non-high-heel-wearing women. Lead researcher Professor Marco Narci said: "This confirmed the hypothesis that when you place the muscle in a shorter position, the fibres become shorter.” 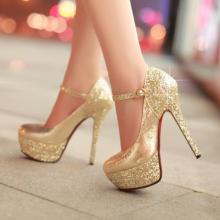 The researchers also found that women who regularly wore high heels suffered more muscle aches and pains when they took their shoes off. This is because their muscles are being overstretched for long periods and do not have time to relax. Professor Narci said it was harder for women to stretch their feet out when they took their shoes off. He did advise women to do simple stretching exercises to relieve the pain. "If you stand on your tip toes and lower your heels up and down again it will stretch out the tendons making it easier to walk without heels,” he said. He did not suggest women stop wearing high heels but recommended wearing flat shoes a little more often."Fashion is intended to be uncomfortable and none of the women in the study planned to give up their high heels," he said.