Scientists from the Bulletin of the Atomic Scientists (BPA) have said the end of the world has come a little closer in the past year. BPA scientists are experts on nuclear weapons, disarmament, the changing energy landscape, climate change, and emerging technologies. It is responsible for setting the Doomsday Clock, which was started in 1947 to symbolize how close the world is to catastrophe. The BPA has just moved the clock's minute hand from three minutes to midnight to two-and-a-half minutes to midnight. This is the closest it has been to midnight (the Apocalypse) since 1953. Then, the minute hand was moved to two minutes to midnight after hydrogen bomb tests by the USA and Russia. 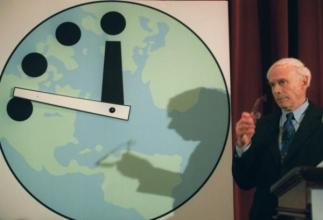 The BPA's latest report said President Donald Trump's recent statements on climate change, building nuclear weapons, immigration and terrorism have added to the global risk. The BPA warned that: "The probability of global catastrophe is very high, and the actions needed to reduce the risks of disaster must be taken very soon." BPA chief Dr Rachel Bronson called on people around the world to make sure their leaders do the right things for the world. She said: "I hope the debate [created] by the 2017 setting of the Clock raises the level of conversation, promotes calls to action, and helps citizens around the world hold their leaders responsible for delivering a safer and healthier planet."