The High Court in Kenya has blocked the Kenyan government's attempt to close the largest refugee camp in the world. The Dadaab camp houses 330,000 refugees. Kenya's government wanted to close it and send 260,000 Somali refugees back to Somalia. The High Court decided it was wrong to send the Somalis back just because of their nationality. A judge said: "The government's decision specifically targeting Somali refugees is an act of group persecution." He added that it was discrimination. Kenya's government said it wanted to close the camp because of security worries. It said that terrorist attacks in Kenya by the Somalia-based al-Shabab group were planned in the camp. 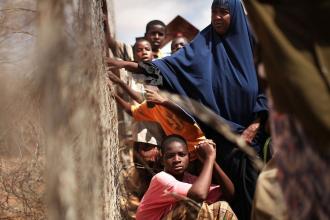 Dadaab was set up in 1992 to cope with people fleeing the civil war in Somalia. It is made up of five giant camps and is run by the United Nations. When Kenya's government said it would close the camp, human rights groups around the world became worried. They feared that sending back so many refugees to Somalia would create a another humanitarian crisis. The human rights group Amnesty International welcomed the High Court's decision. It said Kenya had a duty to protect refugees from harm. It said: "Today is a historic day for more than a quarter of a million refugees who were at risk of being forcefully returned to Somalia, where they would have been at serious risk of human rights abuses."