The immigration community calls them raids. ICE wants to call them planned enforcements. Was this something already planned, or was this a result of Trump executive orders?

ALAN GOMEZ, USA TODAY: Well, everything ICE is saying right now is that this was absolutely a routine operation, that they had actually started planning before President Trump signed his executive order on January 25th that really was designed to ramp up deportations.

But it kind of shows that this is part of their practice. They do this two or three times a year. And according to ICE, this is something that has been weeks in the planning and had nothing to do and was not coming from any different orders from the Trump administration.

SREENIVASAN: Now, is there a wider net that's cast because of what President Trump is interested in?

Under President Obama, he set forth enforcement priorities. In other words, people they were going to target for deportation — undocumented immigrants with criminal records, with gang ties, who posed a threat to national security, and those who had recently crossed the border.

What President Trump did when he signed his executive order on January 25th was vastly expand that pool. So, now, it's people with any kind of criminal record, people who have been charged with crimes that would be deemed deportable, people who committed public welfare fraud, people who have made false representations to the government — in other words, people who use a fake Social Security number to get a job.

And so, when you start adding all that up — I mean, I've seen estimates that this — that eight million to nine million undocumented immigrants are considered priorities by the Trump administration. So, yes, it's a very, very big pool of people that they're going after. 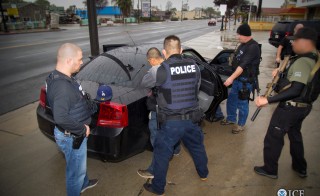 SREENIVASAN: And it's important to note that President Obama, who left office with the title "deporter-in-chief," I mean, this is a fairly well-oiled deportation machine that's already on the books.

GOMEZ: Absolutely. Early in his administration, he made the point very clear that he was going to enforce immigration. At the time, he was doing that to sort of convince Republicans and Congress to go along with him on an immigration reform package. But it sort of — it didn't work for him in either direction. He was bashed by Republicans and by saying that he didn't do enough on immigration enforcement. He was bashed by immigration advocates who said that he was doing too much. And as you mentioned, they labeled him the "deporter-in-chief."

In reality, what happened was he did — for a time, he was setting nearly records of the number of people being deported, at one point reaching 400,000 people. In the last few years, the numbers plummeted.

And so, now, what the Trump administration is trying to do is try to bring that back up.

SREENIVASAN: And this was also at the bulk of enforcement spending goes, right? I've read that basically we spend more on deportations and ICE enforcement than on the FBI, the ATF, the Secret Service all combined.

GOMEZ: I think that deals with the total amount of money that we dedicate to Border Patrol and to ICE. Understand, only a small fraction of people who work for ICE — there are about 15,000 agents that work for ICE — and only about 7 or 8 percent of them are actually on this enforcement removal task force that go out and seek people living in the country.

But, yes, it's an incredibly large apparatus, but it's one that President Trump, without any help from Congress, can increase dramatically. He can retask a lot of people who work for Immigrations and Customs Enforcement, he can refocus all those folks on going into the country and seeking undocumented immigrants. So, even though the apparatus already is large, it can absolutely also be increased dramatically very quickly.

SREENIVASAN: All right. Alan Gomez from "USA Today", joining us from Miami — thanks so much.