JUDY WOODRUFF: The Republican bill to replace Obamacare has officially begun its journey through Congress today. Republican leaders and the White House are pushing it, against opposition, not only from Democrats, but also conservative critics and powerful interest groups.

REP. PAUL RYAN, R-Wyo., Speaker of the House: This is a good day.

REP. PAUL RYAN: This is what good conservative health care reform looks like. It is bold and it is long overdue. And it is us fulfilling our promises.

LISA DESJARDINS: This as two committees started slogging through the bill section by section, as Democrats and Republicans fought over procedure and amendments.

MAN: Excuse me. If you would suspend, we're going to move to forward with the regular order.

LISA DESJARDINS: If you knew where to look, you could see in the audience signs of the larger battle fully under way. At the Energy and Commerce Committee, we saw representatives of doctors groups, like this woman from the American Academy of Family Physicians, and of hospitals, like this lawyer whose firm represents several, also biotech interests, including this man from well-known company, Genentech.

Democrats like Raul Ruiz, a doctor himself, are highlighting some of those groups' reactions.

REP. RAUL RUIZ, D-Calif.: The American Medical Association came out strongly against this bill this morning. As you know, they represent — they are the largest organized group that represents physicians in the s United States. 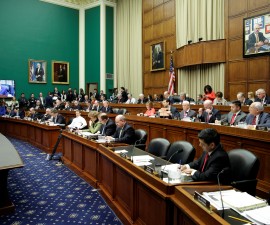 LISA DESJARDINS: The AMA specifically said the bill would — quote — "result in millions of Americans losing coverage and benefits."

Another major group, the AARP, also is opposed, saying the plan would dramatically increase costs for people between the ages of 50 and 64.

But the U.S. Chamber of Commerce praised the plan, calling it absolutely critical in restoring health care markets.

At the White House, Press Secretary Sean Spicer read his own list of supportive groups, and then dismissed the list of doctors and other organizations opposed so far.

SEAN SPICER, White House Press Secretary: This isn't about trying to figure out how many special interests in Washington we can get paid off. It's about making sure that patients get the best deal.

LISA DESJARDINS: Meantime, multiple analysts have concluded the GOP bill will leave millions more without health coverage. Spicer responded to that by questioning a main arbiter, the nonpartisan Congressional Budget Office, which has not yet released its estimate.

SEAN SPICER: If you're looking at the CBO for accuracy, you're looking in the wrong place. They were way, way off last time, in every aspect of how they scored and projected Obamacare.

LISA DESJARDINS: Spicer said the White House will begin a full-court press on the bill. That started late this afternoon as President Trump met with conservatives. Republicans in Congress are aware that they have critics on the left and within their own camp on the right, but they are not yet showing any sweat.

REP. CATHY MCMORRIS RODGERS, R-Wash.: This is just the beginning of the process, and this is the way legislating takes place.

LISA DESJARDINS: It is a tedious, but important week. House committees may take until Friday to work through the bill.

For the PBS NewsHour, I'm Lisa Desjardins at the U.S. Capitol.