JUDY WOODRUFF: We return to the U.S. Senate, where the focus today centered on Russia, from the very real threats of fake news stories to rules for engagement in a cyber-war.

SEN. MARCO RUBIO, R-Fla.: Aren't we in the midst of a blitzkrieg, for a lack of a better term, of informational warfare conducted by Russian trolls under the command of Vladimir Putin?

JUDY WOODRUFF: It was a rare public hearing into Russia's meddling in last year's presidential election. Both Senate Intelligence Committee leaders, Republican Richard Burr and Democrat Mark Warner, made clear that they wanted to avoid the partisanship that's plagued their House counterparts' investigation.

SEN. RICHARD BURR, R-N.C.: We must engage in a whole-of-government approach to combat Russian active measures.

SEN. MARK WARNER, D-Va.: We simply must, and we will, get this right.

JUDY WOODRUFF: The experts testifying before the panel warned that anyone is now vulnerable to Russian interference.

CLINT WATTS, Foreign Policy Research Institute: Well, it's used right now against people of both sides. So, we will watch them play both sides. They might go after a Republican person in this room tomorrow, and then they will switch.

CLINT WATTS: They launch those simultaneously as they begin the engagement or push of false news stories, usually from R.T. and Sputnik News. They do that in unison,which games the social media system, such that such a high volume of content being pushed at the same time raises that into the trends that you will see if you looked at Facebook or Twitter whatever it might be.

JUDY WOODRUFF: The former FBI agent said a part of the proliferation of fake news was because of what President Trump says on Twitter.

REP. JAMES LANKFORD, R-Okla.: There is much more engaging this time in our election. Why now?

CLINT WATTS: He claimed that the election could be rigged. That was the number one theme pushed by R.T., Sputnik news, white outlets all the way up until the election.

Part of the reason active measure works — and it does today in terms of Trump Tower being wiretapped — is because they parrot the same line. But until we get a firm basis on fact and fiction in our own country, get some agreement about the facts, whether it be do I support the intelligence community or a story I read on my Twitter feed, we're going to have a big problem.

KEITH ALEXANDER, Former Director, National Security Agency: This is widespread in a campaign that they are looking at doing that will drive wedges between our own political parties and between our country and NATO, and within NATO and within the European Union.

JUDY WOODRUFF: Watts said, because the U.S. response has been so slow, Russians have no reason to limit their intrusions.

CLINT WATTS: We have no organized response to a country or even a policy towards Russia right now. So, I think, until we set the boundaries about how we are going to either push/pull with them, they are going to move as far as they can pushing.

JUDY WOODRUFF: And Watts offered his own recommendations on how the U.S. can solve that problem.

CLINT WATTS: We need a State Department and a DHS web site that immediately refute when falsehoods are put out. Mainstream media companies, we need to be working with them. What if they boycotted WikiLeaks collectively? What if they all didn't race to publish too quickly?

If those damaging, stolen information that is misconstrued oftentimes doesn't get into the mainstream media, if all of them block it out, Russia's influence dies on the vine. 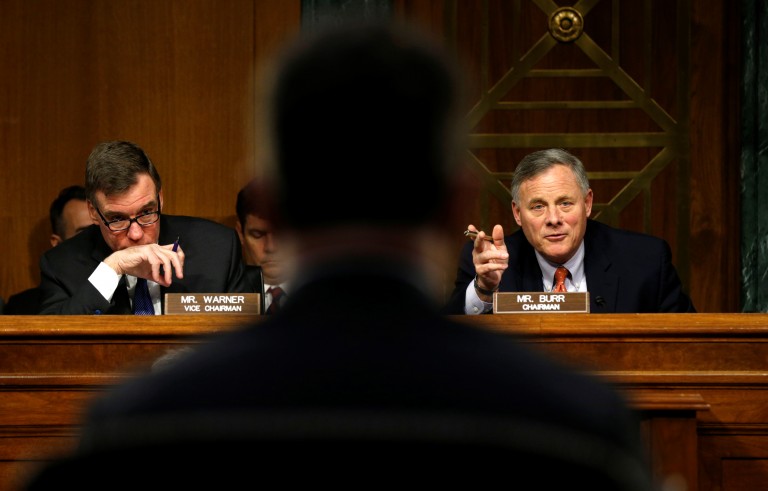 JUDY WOODRUFF: The Senate Intelligence Committee is expected to hold more Sessions on Russia's influence in the coming weeks.

We're joined now by a member of the Senate Select Committee on Intelligence. He is Ron Wyden, Democrat of Oregon.

Senator Wyden, welcome back to the program.

I'm going to ask you about that hearing, but first a quick question about what is going on, on the House side. And that is the disclosure today that it was White House aides who provided the House Intelligence Committee chairman or helped provide him with surveillance reports on the Trump campaign, Trump transition.

And how do you see this affecting the ability of this investigation to go forward?

SEN. RON WYDEN, D-Ore.: Judy, I would just say the new news in the House of Representatives is really bizarre.

And it seems to me the chairman over there, Mr. Nunes, really doesn't have an ounce of credibility left. From all that we have been able to gather, he has sort of conveyed this impression that this information he got was from something like a whistle-blower, a real independent intelligence source. Now it really looks like just plain old White House spin.

JUDY WOODRUFF: And we also learned today that it was individuals close to the president, Steve Bannon, the president's son-in-law, Jared Kushner, who were backing up these efforts, apparently, by the National Security Council.

SEN. RON WYDEN: I have heard those press reports. I can't — can't confirm them.

And the fact is, Judy, in the Senate, we had a really pretty significant hearing. You talked about some of the cyber-questions. I have been concerned that the key to a successful investigation in both the House and the Senate is to follow the money.

Today, what we heard is, that made sense, but you also ought to follow the trail of dead bodies. For example, there was a very mysterious death that the press was reporting on, a KGB officer who was associated with the famous dossier. So, there are a lot of issues to dig into.

JUDY WOODRUFF: So, do you believe after this hearing today on the Senate side that you are closer to understanding the magnitude of Russia's interference in the election?

SEN. RON WYDEN: I think we have to accelerate the pace.

The American people are worried. I think we need to get the facts out, and I think a lot more needs to be done in an open hearing.

JUDY WOODRUFF: You referred, Senator, to your own push,.

You wrote a letter to the chairman and the ranking member of the Senate Intelligence Committee, urging them to look into, as you said, the financial relationships between President Trump and any Russian officials.

Are they following up on that advice, and could that lead to obtaining or trying to obtain the president's tax returns?

SEN. RON WYDEN: Not yet, Judy.

But I only sent them the letter yesterday. Look, the tax returns are a key part of this. And I'm the author of the legislation Presidential Tax Transparency Act, with 20 United States senators, to require those returns be made public, because the returns are really the lowest ethical bar for a president.

JUDY WOODRUFF: Is the ultimate goal here to determine whether there was collusion between the Trump campaign and Russian officials?

SEN. RON WYDEN: That's right at the heart of the agenda. And we could have learned about that, at least some information, quite a bit earlier.

When James Comey came to the Intelligence Committee for another open hearing in January, I asked him whether he was following up on connections between the president and the Russians. And he said he wouldn't answer. We just learned about that recently.

So, the American people deserve more information. They deserve it in a more timely way. And that can be done without compromising our security interests.

JUDY WOODRUFF: And, finally, Senator, are you confident that that — that every effort is being made both by congressional committees and by the investigations under way at the FBI and other government agencies?

SEN. RON WYDEN: I can tell you that it has been very hard to excavate the information we need from the government agencies.

I think both Senator Warner and Chairman Burr would agree on it. One of the things that is going to help is going to be to have more people, more staff people on that case. And we will have some more to say about that down the road.

JUDY WOODRUFF: Senator Ron Wyden, a member of the Senate Select Committee on Intelligence, we thank you.