JUDY WOODRUFF: During the presidential campaign, candidate Trump promised to give the U.S. military more freedom to attack terrorist targets around the world.

Yesterday, it was announced that President Trump made good on that promise.

Hari Sreenivasan has the story.

HARI SREENIVASAN: Among the countries where the U.S. is fighting terrorism are Iraq, Yemen and Somalia. Now the president has approved the Pentagon's plan to beef up its targeting of Al-Shabaab in Somalia, giving the military greater latitude to decide when and where to strike.

For more on all of this, we turn to Sarah Sewall. She served as undersecretary of state for civilian security, democracy and human rights during the Obama administration. She's written extensively about military operations and civilian casualties. She's now at Johns Hopkins University.

Ms. Sewall, I want to first ask — just walk us through what the changes are that the Pentagon just announced.

SARAH SEWALL, Former State Department Official: Well, essentially, President Obama had created two categories for thinking about the use of force in the context of the war on terror.

One was more like targeted killing with more restricted types of targets that you could both choose and were forced to identify, and it controlled the effects of those uses of force more closely. The other is more like what Americans would understand as war, general hostilities.

And what has happened is, the president — the current president has now moved, according to reports, moved the Somalia engagement of U.S. forces from the category of more targeted uses of force to that of general hostilities. 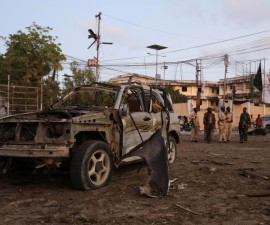 HARI SREENIVASAN: It says that the new rules says it's OK to kill civilians if necessary and proportionate.

What does that mean? In the past, it used to be if they were threatening Americans. That doesn't seem the case now.

That's what I mean by the kinds of targets that are chosen. The former category required that only those who were a direct threat to Americans could be targeted. Now they can be targeted if they're members of an organization that's an associated force with the perpetrators of 9/11.

It has huge impacts for civilian casualties, because the former standard of using the use of targeting according to a near certainty of not killing civilians has now been relaxed.

HARI SREENIVASAN: The military has complained for quite some time, even through the Obama administration, that there was too much red tape between when they actually found the target and the amount of hoops that they had to jump through to try to take action on it.

I think it is fair to say that the U.S. military, like most militaries, will always seek greater latitude for the use of force. It's the role of civilian authorities to make sure that America's broader strategic interests are balanced against tactical possibilities for gain.

And here is where I think President Obama's decision to make sure that the uses of force didn't have blowback, either by virtue of killing civilians unnecessarily, or by feeding into the ISIS narrative that the U.S. was seeking to fight a war against Islam, or by allowing a slippery slope for the use of military force, which is, I think, a legitimate concern that we should be asking about in the context of moving toward general hostilities for engagement in Somalia.

HARI SREENIVASAN: The U.S. military is also going to say, listen, we go out of our way more than anybody else to try to minimize civilian casualties, so what's the harm in giving them a little bit more leeway if they are going to follow the same protocols?

SARAH SEWALL: Well, they are not going to follow the same protocols. The protocols are very different, Hari.

And, yes, the U.S. military is better than almost anyone else at avoiding civilian harm. But we need to only look at the use of airstrikes in Mosul in Iraq to see that there are huge potentials for backlash that come when you relax those protocols. And we can do extremely well, we have done extremely well at different periods in our history.

We know how to be discriminating in the use of airpower. And part of what President Obama's original intent was to keep those standards high as much as possible. So, we should be asking tough questions when the standards are relaxed.

HARI SREENIVASAN: Does the use of or the ability to use more force make our troops any safer?

SARAH SEWALL: Well, I did a study in Afghanistan in 2010, and there was no correlation between the kinds of standards that protected civilians and the protection that our forces enjoyed.

But it does require civilian leadership to emphasize that as a matter of a priority.

HARI SREENIVASAN: All right, Sarah Sewall with Johns Hopkins, thanks so much.