For the first time in 30 years, scientists, meteorologists, sky watchers and cloud lovers have names for 12 'new' cloud formations. The International Cloud Atlas has recognized 'new' types of cloud for the first time since 1987. The atlas has been referencing cloud formations since 1986. It is considered to be the standard and most authoritative reference tool on clouds. The World Meteorological Organization (WMO) now publishes it and has the final say on whether or not to include new clouds and cloud features. The WMO said you don't need to be an expert to find a new cloud. A spokesman said anyone can take a photo and send it to the WMO, and that could be recognized one day as a new cloud. 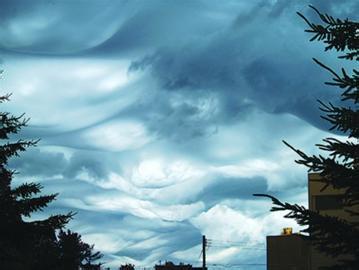 The new addition creating the biggest buzz online is named asperitas, meaning 'rough-like' in Latin. It looks like the tossing of the waves at sea when viewed from below. Another is the volutus. This a low, horizontal, tube-shaped cloud mass that looks like it is rolling. The WMO said the attention the new clouds are receiving could increase people's interest in the environment. It said: "The value of the atlas is that it draws our attention to the sky and by learning the name of the formations…we pay attention to and value what we see around us." It added: "By giving a language to the forms of our atmosphere, we are helping people to value our atmosphere and to pay attention to our impact on it."