JUDY WOODRUFF: The long-simmering standoff between the United States and North Korea is heating up again, with new warnings from both President Trump and Vice President Pence.

MARGARET WARNER: The warnings started at the demilitarized zone dividing the Koreas, where Mr. Pence vowed action to achieve a nuclear-free Korean Peninsula.

Later, in Seoul, he said that, if productive talks didn't start and do the job, President Obama has demonstrated he won't shrink from military action.

VICE PRESIDENT MIKE PENCE: The world witnessed the strength and resolve of our new president in actions taken in Syria and Afghanistan. North Korea would do well not to test his resolve or the strength of the armed forces of the United States in this region.

MARGARET WARNER: Mr. Pence also declared again that the U.S. and its allies will act, unless China its influence to rein in North Korea.

In Washington, President Trump took a moment out from the White House Easter egg roll to send his own briefing warning.

QUESTION: Any message for North Korea?

PRESIDENT DONALD TRUMP: Got to behave. 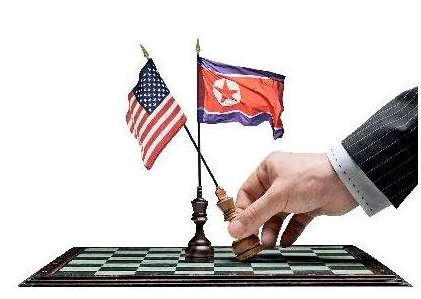 MARGARET WARNER: But at the United Nations, the deputy ambassador from North Korea, officially the Democratic People's Republic of Korea, or DPRK, was defiant.

KIM IN RYONG, Deputy North Korean Ambassador to the United Nations: The DPRK is ready to react to any mode of war desired by the Americans.

A day earlier, Pyongyang had paraded containers large enough to hold new long-range ballistic missiles through the capital. There had been expectations the North would also carry out its sixth nuclear test, but no test occurred.

Today, though, the vice foreign minister told the BBC that his government will be testing missiles weekly, and he warned of a preemptive nuclear strike by the North if the U.S. takes military action.

KIM JI-EUN, South Korean Resident (through interpreter): As Trump became president, the policies seem likely to become more oppressive, and it worries me that war might actually break out.

HONG DONG-WAN, South Korean College Student (through interpreter): In fact, I believe we have to strongly respond to North Korea's provocation.

MARGARET WARNER: Mr. Pence today echoed other top officials in saying the Obama era policy of strategic patience with the North is over. He will look for more regional support as he travels on to Japan, Indonesia and Australia.