JUDY WOODRUFF: With us now to discuss today's congressional testimonies and the ongoing investigation into Russia's interference in November's presidential election is John Carlin. He served as assistant attorney general for national security from 2014 until October of last year. He's now an attorney in private practice specializing in cyber-security and crisis management.

John Carlin, welcome to the NewsHour.

JUDY WOODRUFF: So, you listened to much of today's hearing, the senators questioning the former acting Attorney General Sally Yates, the former head of national intelligence, Director of National Intelligence Mr. Clapper.

What did you mainly take away from today?

JOHN CARLIN: Well, this one thing I heard was a career department official describing handling a situation exactly the way we have handled numerous other counterintelligence investigations.

That said, highly unusual that the individual who is having secret with Russians and essentially not telling his bosses is the actual national security adviser. And you can see why we take that type of situation very seriously, even when it's a much lower-ranking official who possesses access to our nation's secrets.

But for the national security adviser to secretly be having conversations with Russian officials, not telling the vice president of the United States, I can't imagine a situation which would cause more alarm for the career counterintelligence officials.

JUDY WOODRUFF: I mean, how — it's just a natural question. How unusual is a situation like this?

JOHN CARLIN: Well, in some ways, it's usual, insofar as the Russians are constantly trying to compromise officials, even businessmen, in order to gain access and be able to gain secrets. They think years in advance.

Think about one of the cases we prosecuted, the Russian illegal case. These are people here under nonofficial cover, growing families inside the United States, to maybe be used in some later date.

JUDY WOODRUFF: So, I know that former Attorney General Yates and I know Director Clapper couldn't answer — at least they said, in a public setting, they couldn't answer some of these questions.

But how much can be said about how much actual proof there is that there was collusion between the Trump campaign and what the Russians were up to?

JOHN CARLIN: Well, that's not something that I can talk about here. I think it's important that that be investigated by those trained and sworn to do those investigations without fear or favor in a nonpartisan way. And I have every trust in the FBI agents I worked with in — years and following that where it needs to go. 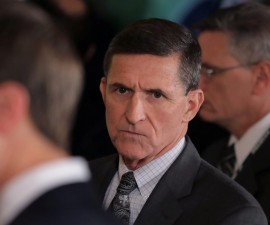 JUDY WOODRUFF: You do have trust in them?

JOHN CARLIN: I do. I have worked with those folks both at the FBI when I was chief staff to Director Mueller, and also with them as a prosecutor at the Justice Department, and the career prosecutors there, that these are people, they don't care about politics.

They're going to follow the evidence where it leads and take it where it needs to go. That said, we have got to look forward. One reason it's important to learn lessons about what exactly what Russia did in our prior election is because we now have heard two more officials, along with the current director of the FBI and our top — the leader of the National Security Agency, say, Russia is going to do this again in 2020, maybe as soon as next year.

We just saw the massive hacking attacks on the French elections. They're doing it now in Europe. We have to change our policy.

JUDY WOODRUFF: So, what does it say that the — I mean, we're going back over what they talked about today.

But then the acting attorney general goes to the White House, to the president's legal counsel, and says, this is what we think is going on. We believe that Mr. Flynn has — General Flynn has had these contacts with the Russians. We think he hasn't told the truth to the vice president.

And then the White House's reaction after a day or so is to say, you're fired.

I mean, what does that tell you?

JOHN CARLIN: Well, I can't talk about what was going on in the minds of the White House when they got this extraordinary briefing that said their national security adviser was compromised by the Russians. But the fact is, he was fired several weeks later.

JUDY WOODRUFF: After that.

And the other thing that came up today that I want to ask you about is the questions from several senators to the acting — Sally Yates, then acting attorney general, about why it would matter that someone in the White House, one White House official didn't tell the truth to another White House official.

JOHN CARLIN: Well, you know, they're new in their positions. And I guess it's good that they asked the questions and received the answers from the career law enforcement national security officials about why that is important, at least when the issue is that someone is lying about contacts with the Russians and what Russians — Russian intelligence services have done with that type of information in the past and how they use it to compromise individuals.

If there were an instance ongoing today — and we don't know this at all to be the case — of someone in the administration talking to the Russians, the intelligence community finds out about it, tries to warn the White House, is it possible for the White House to ignore it and to say, we don't want the hear that information, you're fired, or is it going to get the attention of the people it needs to — it needs to?

JOHN CARLIN: Well, we can only hope that it will get the attention that it needs to.

But it is why it's important in a nonpartisan way, while we have senators like Graham and the White House working together, Senator Grassley, I think, asked appropriately, both officials today, and said, what are the lessons that we have learned? Are they coming again?

They said, yes, the Russians are coming again. We need to harden our state systems. We need to have public hearings like this to educate the American people on how the Russians are using fake news essentially to try to influence elections. And we need to do more to deter them, working with our allies to cause pain to them to make them rethink this tactic of trying to undermine democracy.