JOHN YANG: We begin tonight with a report that President Trump urged then-FBI Director James Comey to drop the investigation of one of his campaign aides' connections to Russia.

The New York Times reports that, at a February meeting, Mr. Trump told Comey, "I hope you can let this go."

It came the day after the president fired National Security Adviser Michael Flynn for lying about his contacts with the Russians. The president fired Comey last week. In response, the White House says that the report is "not a truthful or accurate portrayal of the conversation" and that the president never asked anyone to end any investigation.

For more, we turn now to Matt Apuzzo of The Times.

Matt, thanks for joining us.

Tell me what the significance of this memo is.

MATT APUZZO, The New York Times: Well, the significance of the memo, of course, is just not — you know, just last week, the president fired Jim Comey, the FBI director, and the stories kept changing.

And one of the back-and-forths has been, there was this conversation between Comey and the president in which the president said, "I want your loyalty." And Comey wouldn't give him his loyalty. And then the question became, well, is that why he got fired?

And you will remember that the president tweeted out, oh, Jim Comey better hope there's not tapes of our conversations. Well, it turns out Jim Comey was keeping memos and was keeping contemporaneous notes on every interaction he had with the president and was becoming very concerned about some of those interactions and sought to document those going forward. 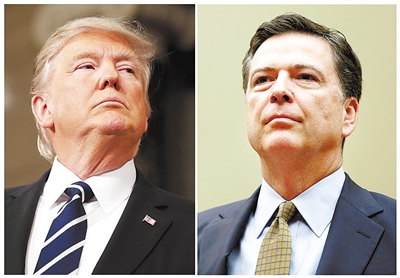 JOHN YANG: And he showed these to colleagues at the time, right?

MATT APUZZO: He showed them to colleagues. He provided them with copies.

And, you know, my colleague Mike Schmidt, who was the primary reporter on this story, talked to people who had seen the memos. That quote you read was read to us. This is — this is something — this is a real — this is a real dramatic turn in this story about, why did Donald Trump fire Jim Comey, and what is Donald Trump attempting to do in terms of influencing the investigation into his campaign and his associates?

JOHN YANG: Matt, tell us more about the specific meeting that you wrote — that is written about The Times, just the story that was posted just a little bit OK?

MATT APUZZO: Yes, we know it's a February 14 meeting, a private meting between the president and the FBI director, Jim Comey.

And, in it, the president mentions how concerned he is about leaks and actually makes this remark that, maybe we need to throw a couple of reporters in jail anyone to sort of send a message.

And then they — the president brings up Michael Flynn and says, look, I think he's a really good guy. And if you can see your way clear about it, just let this go. Let Michael Flynn go. He's a good man.

Now, Comey went back, apparently, and documented that conversation. And one thing that's interesting about Comey is, 10 years ago, Comey was at the center of another major issue where he described this dramatic showdown with the Bush administration over warrantless wiretapping. And the White House denied that conversation.

MATT APUZZO: Our understanding is, he documented every interaction, every meeting and every phone call with the president and, on a number of occasions, expressed concerns about the about the emerging relationship between the White House and the FBI director.

Remember, the FBI director is normally kind of an arms-length relationship with the White House for precisely this reason, because, sometimes, you know, the FBI can be investigating things that are politically problematic for the White House.

JOHN YANG: Matt Apuzzo, as you say, this could be a dramatic turning point in this relationship and what is going on between the two men, between President Trump and James Comey.

Thanks for joining us.

MATT APUZZO: Great to be here. Thanks so much.