JOHN YANG: Now for some insights on this apparent disclosure, and the wider effects on intelligence-gathering and sharing, I'm joined by two men with deep knowledge of the U.S. intelligence community and the partnerships it relies upon.

James Woolsey served as director of the CIA from early 1993 until January 1995. He was an adviser to President Trump's campaign last year. And Andrew Exum, he was former deputy assistant secretary of defense for Middle East policy in the Obama administration. He's also a former Army Ranger.

Mr. Woolsey, let me start with you.

You heard Senator Risch say this was a good thing the president did, not a bad thing. Do you agree?

JAMES WOOLSEY, Former Director, CIA: Well, it depends on whether the information gets out and damages our — either our relations with another country or our ability to keep sources and methods held very closely.

It may be that it will not cause a major difficulty. But I think giving anything away to the Russians is something that has to pass about half-a-dozen levels of scrutiny. And that's the real problem here.

Unlike President Reagan, who was faced with declassification decisions on the aircraft that was shot down, the Russian aircraft, and so forth, here, we have just turned it loose, and to the Russians. And that ought to have been preceded by a day or two anyway of high-level discussions among top-level officials to make sure we knew exactly what we were turning loose and exactly why.

JOHN YANG: Andrew, what's your take on this?

With all due respect to the senator from Idaho, any time — and, look, I just came out of government service at the Pentagon. I know how frustrating leaks can be, but any time someone says the real problem is the media or leaks, they're usually trying to defend the indefensible.

And the problem here is that I don't think the American people realize how much of our intelligence is actually derived from our partners. If our partners cannot feel or do not trust that our president will not divulge that information to, I mean, goodness gracious, the Russians in this case, then that could create real problems for us going forward.

So, I completely agree with everything that Director Woolsey said. I think that this is a broader problem, regardless of how bad the actual leak was.

JOHN YANG: And when you were in the Obama administration, there was a lot of debate over how much intelligence over Syria to give to the Russians.

ANDREW EXUM: Yes, there sure was. 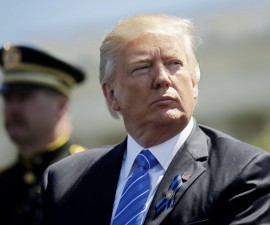 JOHN YANG: What were the issues? I mean, we heard Mr. Woolsey say you have got to go through a lot of checkpoints. What were the considerations you went through on that?

You talk to anybody in the intelligence community, and you say, we want to release some information to the Russians, first off, making something secret releasable to Russia is almost a contradiction in terms, because so many of the sources and methods that we have developed over decades are really to allow us to spy on the Russians.

It's from the Cold War. So, there's a lot of worry that, even in divulge anything type of information to the Russians, even if you don't get into sources and methods, they're going to backwards-engineer how you got that information, and thus learn something about your own capabilities.

So that was a huge concern any time you start to discuss sharing information with the Russians.

JOHN YANG: And, Mr. Woolsey, there are reports now that this information came from Israel. Is that a particular concern of giving this information to Russia, who is allied with Iran, who Israel sees as a mortal threat to their existence?

JAMES WOOLSEY: Yes, but there's a major footnote, I think.

The yes is because of the way you formed the question. Yes, it is a serious matter if it undercuts Israel's security at all and if it disturbs our relations with them. But the Israelis, looking at the shift from President Obama to President Trump, would probably give up a couple of half-ton trucks full of classified information in order to preserve that switch.

And they are very happy with — and understandably so, with the new American administration. And although they would have criticisms, and if there was something really sensitive in this, they would have been very upset about it and would have come in and talked to the American director of central intelligence and explained why they were really worried and it ought not to happen again.

But in terms of quietly seething and being really upset and so forth, no, they're — I think they're very pleased at having a Trump administration.

JOHN YANG: Mr. Woolsey, General McMaster said that he — that the president didn't know where this information came from.

You're experienced at briefing presidents, and also, quite frankly, briefing this president. You worked with him in the campaign. How much information do you give a president about a piece of intelligence?

JAMES WOOLSEY: Well, I think in a circumstance in which he has to make a decision to disclose it to some government or individual that would be a serious potential problem, such as to Russia, I think you owe him a very thorough understanding, and you ought not to just send the paper in as part of a document.

He deserves a really thorough scrubbing.

JOHN YANG: Andrew Exum, so, talk about, what is the potential threat to intelligence gathering in the future?

Well, first off, I think that Director Woolsey is probably right in terms of talking about the way in which the Israeli prime minister views the switch from Obama to Trump. I don't necessarily think he's speaking for the Israeli defense and intelligence establishment.

You're already starting to see quotes from Israelis nervous about what has potentially transpired. And, there, I think the worry going forward is that, not just with the Israelis, but with all of our partners, there's just going to be a reluctance to hand over information to the Americans, especially if it's sensitive, because, frankly, under our system, any secret is the president's.

The president — you know, things are classified at his discretion and at his pleasure. So, legally, the president can do exactly what he potentially did a few days ago in terms of releasing information to the Russians. I think that that's going to be problematic, to say the least, for many of our partners, not only in the region, but elsewhere around the globe.

JAMES WOOLSEY: I agree with that.

JOHN YANG: I know we could talk much more about this, but I'm afraid we're out of time. We have got to leave it there.

Andrew Exum, James Woolsey, thank you both for joining us.

JAMES WOOLSEY: Good to be with you.