JUDY WOODRUFF: The people of Iran go to the polls tomorrow to vote in a controlled, but still heated presidential election.

REZA SAYAH: It's the closing stretch in Iran's presidential race. And the capital, Tehran, is at fever pitch, from the streets, to sports arenas, and campaign headquarters. The candidates' foot soldiers make a final push to win over voters.

It's an election that will pit liberals vs. conservatives, determine domestic policy, and shape Iran's relations with the West.

ZEINAB ASGHARPOUR, Rouhani Campaign Volunteer (through interpreter): These last days can make a huge difference. It's up to us to whip up excitement. If we do that, God willing, we will have good results.

HASSAN ROUHANI, President of Iran (through interpreter): Have them tell you what they have done for the past 38 years. What I have done in the past four years is quite clear.

REZA SAYAH: But Iran's economy is still struggling. The moderate reformer and his supporters say, let's be patient and move forward.

HAMIDEH ASHOURI, Rouhani Supporter (through interpreter): Maybe we didn't have an actual war, but there was a domestic struggle. We faced harsh sanctions. People suffered to survive. The last thing we want is to go backwards.

REZA SAYAH: But Rouhani supporters are nervous. There is a serious conservative challenge from hard-line cleric Ebrahim Raisi.

MAHDI ARMAGHANI, Ebrahim Raisi Rally Leader (through interpreter): We believe we are standing by the side of God, and God will definitely stand by us.

REZA SAYAH: Raisi is Iran's former top prosecutor, linked to mass executions of political dissidents in 1988. He's never been elected to office, but is backed by the clerical establishment, an important endorsement. Some say he's being groomed to succeed Iran's supreme leader, Ayatollah Ali Khamenei.

In campaign speeches, Raisi accuses Rouhani of ignoring the poor and failing to deliver on the promised benefits of the nuclear agreement.

EBRAHIM RAISI, Presidential Candidate (through interpreter): Most of our challenges can be solved with our nation's resources, our potential, strong leadership, our people's revolutionary values.

REZA SAYAH: At this Raisi rally, a film taunts President Rouhani, suggesting he sold out his revolutionary values to cozy up to Washington.

MORTEZA JAVID, Raisi Supporter (through interpreter): All these sanctions are in place. We lost our dignity. There's no doubt it's time for change.

MOGHADAM, Raisi Supporter: His main attention will be on us, inside the border.

Rouhani's supporters want to silence those chants. They demand social and political reform and better relations with the West. They say a vote for Raisi is a return to isolation and confrontation.

HAMIDEN ASHOURI, Rouhani Supporter (through interpreter): America is bad, but it's not all bad. If we keep fighting and beating ourselves up, nothing will ever get done. 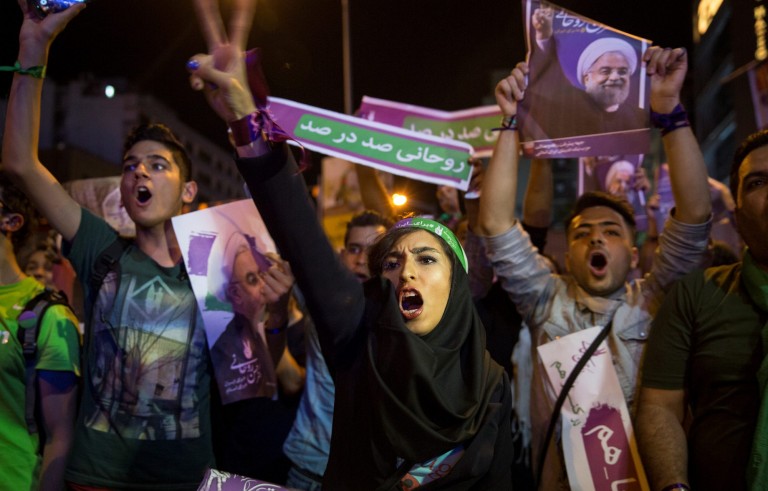 Just this week, the Trump administration imposed new sanctions against Iran over its ballistic missile program.

MOHAMMAD MARANDI, Political Analyst: They have not abided by their side of the bargain. And by doing so, they hurt President Rouhani, his credibility.

REZA SAYAH: Marandi says, no matter who wins the vote, U.S.-Iran relations will remain icy, and, he says, there is little chance of confrontation.

MOHAMMAD MARANDI: The Iranians recognize that the United States is in a very difficult position, that it cannot launch another war. I don't think that there is any chance of military conflict.

REZA SAYAH: In Northern Tehran this week, this has been a nightly ritual, people in cars, on foot making a lot of noise for their favorite candidate.

Maybe one of the most surprising aspects this campaign is how tolerant security forces have been. People are able to gather, demonstrate, and chant slogans, even slogans that were very taboo just eight years ago.

When an estimated 25,000 Rouhani supporters packed Tehran's main sports arena this week, the loudest cheers were for Mir Hossein Mousavi, the reformist candidate whose defeat in 2009 sparked mass protests by the Green Movement. The government crushed the protests, but the color green sits next to the Rouhani campaign's purple banners, still symbolizing the demand for democratic change.

No matter who voters are supporting, their number one demand is for the next president to make life more affordable.

MOHAMMAD MARANDI: I think that the important thing for Iranians right now is the state of the economy.

REZA SAYAH: Three out of 10 young Iranians don't have jobs. Many can't afford to get married or buy a home. Rouhani wants more time to fix the economy.

The lifting of international sanctions increased oil sales and curbed inflation, but the billions of dollars in foreign investment President Rouhani promised have yet to arrive.

Raisi says he will fight corruption, build low-income housing, and double cash subsidies to the poor.

REZA SAYAH: No incumbent president in Iran has failed to win a second term since the 1979 Islamic Revolution. Zeinab Asgharpour and fellow Rouhani supporters roam Tehran's streets, pleading for voters to keep that streak alive.

For the PBS NewsHour, I'm Reza Sayah in Tehran.