JUDY WOODRUFF: President Trump is spending tonight in Israel, after a day of talking up peace prospects in the region. It's all part of his first overseas trip since taking office.

We begin our coverage with a report from John Yang.

JOHN YANG: Amid the pomp of President Trump's arrival ceremony in Israel was an issue of policy that's confounded presidents for generations, the Israeli-Palestinian conflict.

PRESIDENT DONALD TRUMP: Now we must work together to build a future where the nations of the region are at peace. We have before us a rare opportunity to bring security and stability and peace to this region.

BENJAMIN NETANYAHU, Prime Minister, Israel: Israel's hand is extended to peace in peace to all our neighbors, including the Palestinians. The peace we seek is a genuine and durable one, in which the Jewish state is recognized, security remains in Israel's hands, and the conflict ends once and for all.

JOHN YANG: The warmth between the two men was evident, as was the Israeli prime minister's pleasure in both the change of U.S. presidents and a new direction on Iran.

JOHN YANG: In an unscripted moment, the president seemed to give the first official confirmation that the highly classified intelligence he gave Russian officials came from the Israelis. 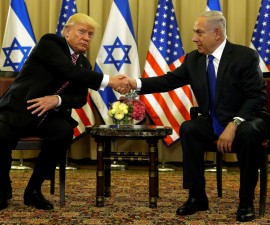 JOHN YANG: In Jerusalem's Old City, Mr. Trump visited two of the holiest sites of Christianity and Judaism: the Church of the Holy Sepulchre, believed by many Christians to be the site of Jesus' tomb, and the Western Wall, believed by Jews to be part of Herod's Second Temple.

Mr. Trump began his trip with a much-anticipated visit to Saudi Arabia. There, he appealed to Sunni Arab leaders to unite to against extremist movements like ISIS and al-Qaida and other militant groups backed by Shiite Iran.

The centerpiece was a speech the White House billed as an address to the Muslim world.

JOHN YANG: It represented a big shift in tone and temper from the campaign, when he condemned Islam for hating America.

The president's Saudi visit coincided with the reelection of Hassan Rouhani as president of Iran, which was the target of much of Mr. Trump's rhetoric.

PRESIDENT HASSAN ROUHANI, Iran (through interpreter): He has gone to a country where I think the word election has no meaning for them. They have never seen a ballot box. I hope that the day will come that Saudi Arabia will adopt this path.

JOHN YANG: Like the Israelis, the Saudis also welcome the shift in the U.S. approach to Iran that the change in leaders brings, one reason for the opulent Saudi welcome for Mr. Trump, which included a traditional sword dance to underscore the friendship Saudi King Salman extended to the president.