Ciaran Jenkins of Independent Television News has that story.

CIARAN JENKINS, ITN: This is now a hunt for Salman Abedi's accomplices, armed police and special forces forcing their way into a Central Manchester property earlier. It took a controlled explosion to get them in.

In the south of Manchester, three more arrests, and another in Wigan tonight, followed the arrest yesterday of Abedi's older brother. Now, there is a real urgency to police activity in this city today. Remember, the current threat level means an attack is expected imminently. Police want to know if there are more bombs in circulation, or if there are other potential attackers and, crucially, who made this man's deadly device.

Police have yet to say definitively if it was the work of an accomplice, but, this afternoon, the first confirmation that Abedi didn't act alone.

Do you believe somebody else put the bomb together, and are you searching for that person? Is this a search now for a bomb-maker? 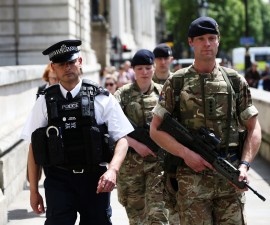 CIARAN JENKINS: The threat level is at its highest for the first time in 10 years, the army enlisted to protect key landmarks at Buckingham Palace and in Westminster. Manchester armed police patrol Piccadilly Station and the Arndale shopping center.

WOMAN: It's not going to stop me going about my daily life or anything like that. It's just something in the back of the mind that's a bit scary.

WOMAN: It really all just feels like a different place, you know?

CIARAN JENKINS: As the hours pass, we learn a little more of the innocent children who were killed, and the adults who accompanied them.

Michelle Kiss, a mother of three, taken, her family said, in the most traumatic way. And Kelly Brewster, her friends said she died saving a young life, throwing her body on her niece as the bomb exploded. Saffie Rousso from Leyland was the youngest victim, 8 years old.

CHRIS UPTON, Headmaster: Saffie was simply a beautiful little girl in every aspect of the word. She was loved by everyone, and her warmth and kindness will be remembered fondly. Saffie was quiet and unassuming, with a creative flair.

CIARAN JENKINS: There is resilience in a Manchester, all too conscious of the still-imminent threat, but there is impatience too to see those who brought horror to this city taken off the streets.

JUDY WOODRUFF: This evening, police in Manchester announced two more arrests. And Britain's home secretary criticized U.S. officials for leaking the name of the bomber and other information.