JUDY WOODRUFF: The situation is deteriorating day by day. Those were the words of one of Afghanistan's lawmakers after a huge truck bomb devastated part of Kabul today. It killed at least 90 people, and wounded 400 more.

MARGARET WARNER: A pall of black smoke, sirens wailing, chaos in the streets. A gigantic suicide bomb had detonated in the highly secured heart of the Afghan capital. The tremendous force of the blast gouged out a 15-foot crater and blew out windows as far as half-a-mile away.

RAHIM, Witness (through interpreter): The explosion took place the minute we sat down. After the explosion, we hurried downstairs and saw all the things damaged. Many buildings were badly destroyed.

MARGARET WARNER: Special correspondent Jennifer Glasse in Kabul, who spoke to us via Skype, said the bombing came as a jolt.

JENNIFER GLASSE: It's been quiet here in the Afghan capital for the last couple of weeks, almost eerily quiet. The weather's been beautiful. People have been going out for picnics. The scale of this attack is really unprecedented, the worst we believe since 2001, and that is such a terrible, terrible shock to people.

MARGARET WARNER: The bomb hidden in a septic tank cleaning truck rocked the diplomatic quarter at the height of morning rush hour. Despite its fortified blast wall, Germany's embassy suffered extensive damage. The bomb site was also close to the Afghan presidential palace and defense ministry.

The U.S. Embassy is about a mile away, yet 11 American contractors were hurt. Scores of the wounded were rushed to nearby hospitals, where some told of surviving the blast.

SEBGHATULLAH KHAN, Victim (through interpreter): Everything was destroyed in my location. I don't know what happened. There were lots of workers. A lot of people were martyred. All the people who were on the street were killed. 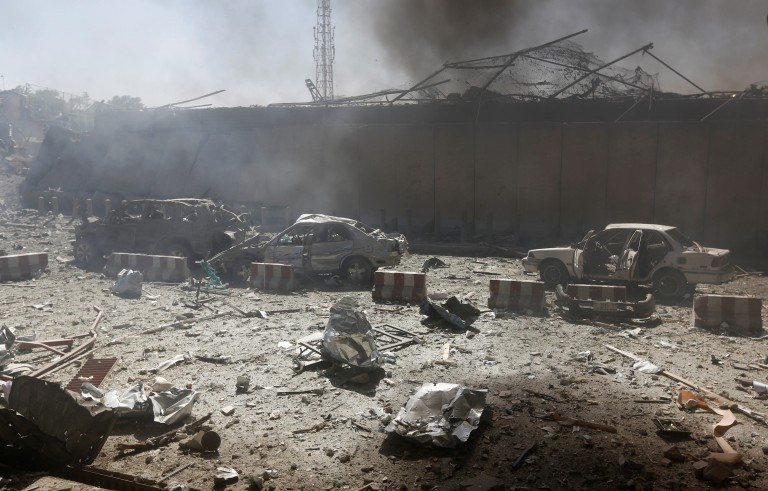 CHANCELLOR ANGELA MERKEL, Germany (through interpreter): In moments like these, it is once again clear to us that terrorism knows no boundaries. All of us who believe in the rights, the freedom and the dignity of mankind in Europe, America, in Africa, and of course also in Afghanistan will wage the battle against terrorists and we will win.

MARGARET WARNER: Today's bombing is just the latest in a string of attacks that have racked the Afghan capital. Security conditions have deteriorated sharply. And hundreds of Afghans have been killed in bombings from both a resurgent Taliban and a growing faction of the Islamic State.

Jennifer Glasse says the Afghan security forces' failure to protect them have roiled the country's citizens.

JENNIFER GLASSE: There's a lot of anger here among the Afghan people. How this large truck got into this part of Kabul, heavily fortified — you're not allowed to have big trucks in the center of Kabul during the daytime for security reasons and for traffic reasons. And so there are a lot of questions among the Afghan people how this could have possibly happened.

MARGARET WARNER: The Taliban denied responsibility for today's blast, and in fact condemned it.

JENNIFER GLASSE: We have seen this before, especially in cases where there have been large civilian causalities and a potential for a public backlash, that the Taliban, sometimes, even when they have carried out the attack, deny that the attack was theirs.

MARGARET WARNER: Afghan troops have suffered heavy losses over the past year, as the Taliban has made gains across the countryside. Now the Trump administration has signaled it plans to take a more aggressive role there.

Reports surfaced earlier this month that the president is considering sending 5,000 more U.S. troops to support the 8,000 already on the ground.

JENNIFER GLASSE: The idea is to get more international forces a little closer to the ground level to guide the Afghan security forces in the field, to get them a little bit more coordinated, and to make them a little more effective in the fight against the Taliban. They're right now taking punishing casualties, losing 15, sometimes 20 soldiers a day across the country.

MARGARET WARNER: The U.S. also has stepped up airstrikes and raids against the Islamic State group that's now active in Eastern Afghanistan. Last month, in a highly publicized move, the U.S. dropped its most powerful conventional bomb on ISIS hideout there.