Malcolm Brabant is in London, and filed this report.

MALCOLM BRABANT: Police were in action in East London again this morning, raiding an apartment complex and a tire shop, detaining more people in the wake of Saturday's attack.

CRESSIDA DICK, Commissioner, Metropolitan Police: We have hundreds and hundreds of officers engaged in trying to piece together whether anybody else knew about the attack or planned or supported it in any way at all.

MALCOLM BRABANT: The three attackers were shot dead Saturday night, minutes after they drove a van into people on London Bridge, and then went on a stabbing spree.

Today, officials named two of them; 27-year-old Khuram Shazad Butt was a British citizen born in Pakistan. Rachid Redouane claimed both Libyan and Moroccan nationality. Butt was known to the authorities as an extremist. Last night the Islamic State group claimed responsibility for the attack.

THERESA MAY, British Prime Minister: We have given increased powers to the police to be able to deal with terrorists, powers which Jeremy Corbyn has boasted he has always opposed.

SADIQ KHAN, Mayor of London: We have had to close police stations, sell police buildings and we have lost thousands of police staff.

MALCOLM BRABANT: Khan himself drew criticism from across the Atlantic. Yesterday, the mayor told Londoners there's no reason to be alarmed by the increased police presence in the city. President Trump then fired off a tweet that said: "At least seven dead and 48 wounded in terror attack and mayor of London says there is no reason to be alarmed."

There's history here. Khan criticized candidate Trump last year for his proposed travel ban, and the candidate challenged him to an I.Q. test. The mayor didn't respond to Sunday's tweet, but many argued the president took him out of context.

Mr. Trump followed up this morning, saying: "Pathetic excuse by London Mayor Sadiq Khan, who had to think fast on his no reason to be alarmed statement. Mainstream media is working hard to sell it."

A White House spokeswoman followed up. 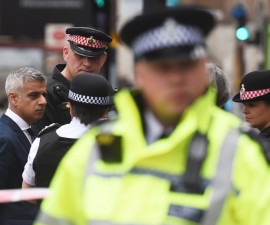 SARAH HUCKABEE SANDERS, Deputy White House Press Secretary: There is a reason to be alarmed. We have constant attacks going on, not just there, but across the globe, and we have to start putting national security and global security at an all-time high.

MALCOLM BRABANT: Away from the politics, forensics officers carefully searched for evidence again today, but some semblance of normalcy returned. Pedestrians and cars were allowed across London Bridge.

But around three of the city's iconic bridges, the stepped-up security was unmistakable. On Westminster Bridge, where tourists line up to take pictures of Parliament and Big Ben, overnight, they installed steel barriers between the road and the sidewalk. There was some resistance to the move, but officials moved quickly to get the protection in place.

At Lambeth Bridge, next to Westminster, it's still a work in progress, as there's only one barrier in place on the northbound side. At least one former high-ranking security official has said Islamic extremists should be placed in internment camps.

But Maajid Nawaz, a leading anti-radicalization expert, warns against them.

MUSTAFA FIELD, Faiths Forum for London: These low-level cowardly attacks that are now seeping through. There is nothing sophisticated about what they are doing. So, we need to make sure that our polities bring communities together and that we work together to confront this evil ideology.

MALCOLM BRABANT: This evening, the city of London held a vigil to honor the people killed in the attack. This vigil which has been designed to send a message of solidarity and love from Londoners. There've been about 5,000 people here. There's been a minute of silence. And the atmosphere right now seems to be fairly calm and relaxed.

But, nevertheless, the police are on high alert, and right behind me there's a man being frisked. For now, the threat level in Britain remains at severe. That means an attack is still highly likely.

For the PBS NewsHour, I'm Malcolm Brabant in London.