JUDY WOODRUFF:Russia and the president were not the only subject that made news today. Senators again questioned Director — former Director Comey about his handling of the investigation into Hillary Clinton's e-mail and what pushed him to take the unusual step to discuss it publicly last summer, which you all have brought up.

SEN. RICHARD BURR, R-N.C.: Let me go back, if I can, very briefly to the decision to publicly go out with your results on the e-mail. Was your decision influenced by the attorney general's tarmac meeting with the former president, Bill Clinton?

In, ultimately, a conclusive way, that was the thing that capped it for me that I had to do something separately to protect the credibility of the investigation, which meant both the FBI and the Justice Department.

SEN. RICHARD BURR: Were there other things that contributed to that, that you can describe in open session?

JAMES COMEY: There were other things that contributed to that.

Probably, the only other consideration that I guess I can talk about in open setting is that at one point the attorney general had directed me not to call it an investigation, but instead to call it a matter, which confused me and concerned me, but that was one of the bricks in the load that led me to conclude I have to step away from the department if we're to close this case credibly.

JUDY WOODRUFF: So, Carrie Cordero, this is the one part of today's hearing that looked back at the Clinton e-mail story, which, of course, went on for months and months.

How do we read what Director Comey is saying here about the former attorney general, Loretta Lynch?

CARRIE CORDERO: So, I think the former director has take a really bad rap on this July decision to go public with his finding.

In my view, the attorney general at the time, Loretta Lynch, put him in an extraordinarily difficult position. She didn't officially recuse from the decision, which she could have done after the tarmac meeting, nor did she say, I'm going to make the decision and I own it.

And because she did neither of those things, either said she was going to make the prosecutorial decision and own that decision, or officially recuse and say, Sally Yates is in charge, she left this sort of middle ground where she just said, well, I'm going to accept the decision of the prosecutors.

And, therefore, I think that what the former director was saying is, he felt then that that would have tainted any future decision. 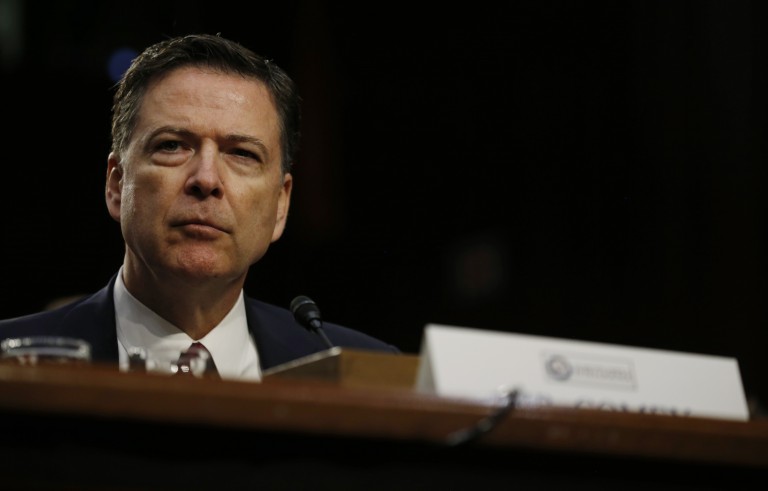 JUDY WOODRUFF: I think some people — George Terwilliger, some people who are close to the former attorney general are saying that this came up more innocuously, that it wasn't an order, stop using the term investigation, call it a matter.

Be that as it may, Comey has left out there being very critical of the former attorney general.

GEORGE TERWILLIGER: Yes, I'm sort of troubled by this aspect of that exchange and what we heard today.

I can understand the point that Carrie makes that Comey felt like the decision-making process at the Justice Department appeared corrupted because of the tarmac visit and so forth. But there's other remedies to that.

But it seems to me it kind of got blown out of proportion, if that's the justification for the July proceeding.

JUDY WOODRUFF: John Carlin, how do you see this?

JOHN CARLIN: I'm going to move to where Carrie started, which is, we know the Russians are going to attack us again. They tried to undermine confidence in the integrity of our election.

It was reaffirmed today. It's been reaffirmed by every national security official. And they're going to do it as early as 2018.

Right now, when you think about the decisions last summer about the Clinton investigation, about the Russian investigation, it is extraordinarily difficult for the political appointees to make a decision calling out investigations, particularly when they have to do with the interference in an election.

What I worry about going into 2018 is, we're in far worse shape right now in having a credible official who can call out Russian meddling in our elections. And so I think we should think seriously about which career — nonpartisan career officials do we give the task of calling out if the Russians attack our electoral system again in 2018?

JUDY WOODRUFF: In about 20 seconds, Greg Craig, you get to weigh in here, final word.

GREGORY CRAIG: Well, on the Comey press conference in July, I do have views on that. I think he violated guidelines and practices in the Justice Department. And he went beyond that and commented on her conduct. And it was unacceptable. And it was a mistake, a terrible mistake.

JUDY WOODRUFF: Well, that one, I don't think we're going to resolve as we sit here this evening.