A new study carried out in Honduras reports that swimming with dolphins helps reduce stress and lift depression. Researchers from England’s Leicester University found that 15 people with mild or moderate depression became happier after they swam with dolphins. Playing in the water with the dolphins led to falling levels of symptoms of depression in the patients. No one took drugs or had psychotherapy for four weeks before the study. Researchers saw positive results after just two weeks of the dolphin therapy. They concluded that being with nature is very important for human wellbeing. 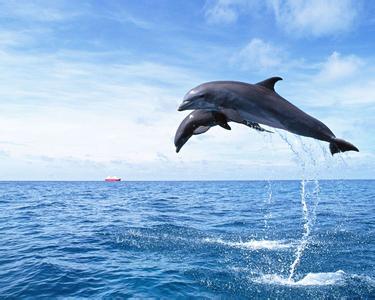 The study observed two groups of patients – one played with dolphins, the other swam alone in a pool. The dolphin therapy lifted depression much quicker than results usually seen with psychotherapy or drug therapy. With traditional therapy, symptoms usually improve after four weeks. Researcher Michael Reveley said animals could be used to treat other mental illnesses. He also said dolphins are “highly intelligent animals who are capable of complex interactions, and regard humans positively.” He added: “We are part of the natural world, and interacting with it can have a beneficial effect on us.”