JUDY WOODRUFF: It's the latest revelation in the story that's consumed much of the Trump presidency so far: the Russian meddling in the 2016 election. And this time, it involves the president's son.

KELLYANNE CONWAY, Trump Senior Adviser: This was standard operating procedure for the campaign. Let's focus on what didn't happen in that meeting. No information provided that was meaningful. No action taken. Nothing.

The president's son said he had been told that Veselnitskaya had damaging information about Hillary Clinton, who had clinched the Democratic nomination just days before. The meeting came as some Republicans openly talked of trying to deny Mr. Trump their party's nomination at the convention.

On Saturday, Donald Trump Jr. described the session as a short introductory meeting in which U.S. adoptions of Russian children were discussed. But yesterday, faced with The New York Times' reporting on the purpose of the meeting, he acknowledged he was told the lawyer might have information helpful to the campaign. 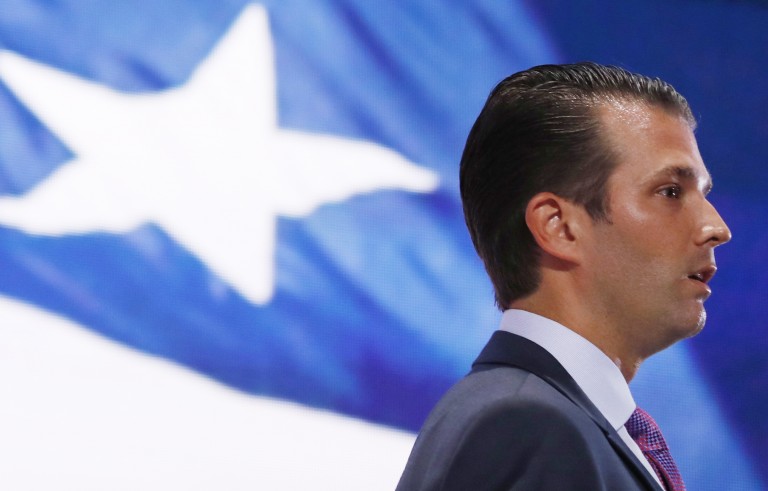 He said: "The woman stated that she had information that individuals connected to Russia were funding the Democratic National Committee and supporting Ms. Clinton. Her statements were vague, ambiguous and made no sense. It quickly became clear that she had no meaningful information."

SARAH HUCKABEE SANDERS, Deputy White House Press Secretary: Don Jr. took a very short meeting from which there was absolutely no follow-up. Don Jr. didn't collude with anybody to influence the election.

JOHN YANG: Today, Donald Trump Jr. said: "Obviously, I'm the first person on a campaign to ever take a meeting to hear info about an opponent Went nowhere, but had to listen."

He also said he'd cooperate with the Senate Intelligence Committee's investigation of Russian meddling in the election.

In Moscow, a spokesman for Russian President Vladimir Putin said the Kremlin knew nothing about the lawyer or the meeting.

All this comes amid continued confusion over just what came out of the president's meeting with Putin last week at the G20 summit. Administration officials had hailed the creation of a joint cyber-security unit to guard against election hacking.

SEN. LINDSEY GRAHAM, R-S.C.: To forgive and forget when it comes to Putin regarding cyber-attacks is to empower Putin. And that's exactly what he's doing.