A new study has revealed that a tiny, water-dwelling creature is likely to live until the end of the Earth. The near indestructible tardigrade, also known as water bear, looks like a short caterpillar with eight legs. It is just one-tenth of a millimeter in size but has the physiological makeup to be able to survive in any extreme conditions. The microscopic water bear can survive without food for three decades. It can also exist in bitterly freezing temperatures of -272 Celsius and in furnace-like temperatures of 150 C. Water bears can also survive the crushing pressure of deep oceans, the vacuum of outer space, nuclear war, global warming, or any other extreme meteorological event that would doom humans. 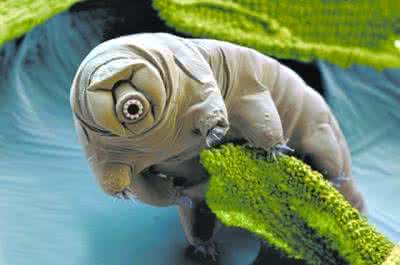 Scientists say water bears are so hardy and resilient that the only thing that would wipe them out for good is if the Sun boils all the Earth's oceans away. The study says this is likely to happen in several billion years from now. The new study states that complex life is extremely difficult to destroy and could exist on other planets. A researcher said: "Tardigrades are as close to indestructible as it gets on Earth, but it is possible that there are other resilient species examples elsewhere in the Universe." He added: "There is a real case for looking for life on Mars and in other areas of the Solar System. If tardigrades are Earth's most resilient species, who knows what else is out there?"