WILLIAM BRANGHAM: Yesterday brought another low point between the United States and Russia, as Vladimir Putin elaborated on his demand that the U.S. reduce its staff in Russia by hundreds of personnel.

It's the latest diplomatic flash point in a tense relationship that President Trump and Putin had sought to improve.

NICK SCHIFRIN: This weekend on the Neva River in St. Petersburg, Russia celebrated its global naval ambitions. President Putin hailed thousands of Russian sailors lined up on ships and submarines. He said his hopes for a revamped, reenergized navy had been realized. And he admitted his hopes for a better relationship with the United States had been dashed.

PRESIDENT VLADIMIR PUTIN, Russia (through interpreter): We had waited quite a long time and thought something might change for the better. We had hoped that the situation will somehow change, but apparently, if it changes, it won't be soon.

On state TV, Putin said he hoped he wouldn't have to deliver further punishment.

VLADIMIR PUTIN (through interpreter): We certainly have something to respond with and restrict those areas of joint cooperation that will be painful for the American side, but I don't think we need to do it. 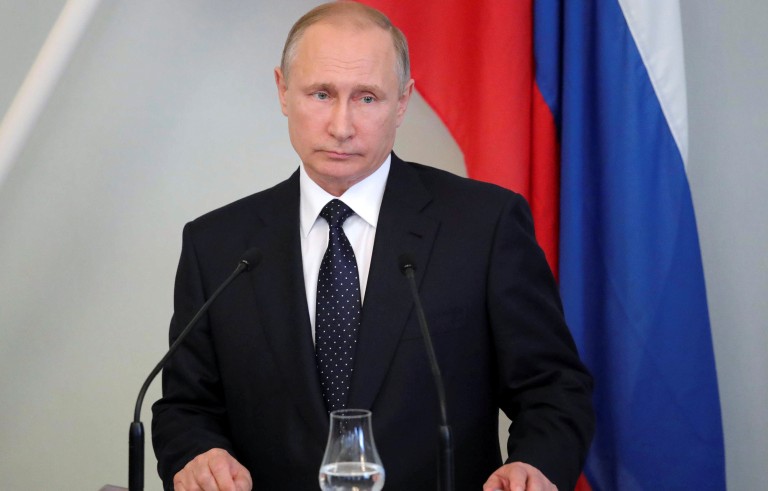 DMITRI TRENIN, Carnegie Center: He cares about the relationship. he is not going to burn his bridge, although it may be a very rickety bridge, that he has established with President Trump.

NICK SCHIFRIN: Just 300 miles away from St. Petersburg, Vice President Pence visited NATO and E.U. member Estonia. He praised Estonia's commitment to NATO and called the Russian government's cap on staff drastic. And, like Putin, he said he hoped things didn't get even worse.

VICE PRESIDENT MIKE PENCE: A better relationship and the lifting of sanctions will require Russia to reverse the actions that caused the sanctions to be imposed in the first place.

NICK SCHIFRIN: Those actions include destabilizing Ukraine and hacking during the 2016 election. Most U.S. officials tell me they want to see a robust response to Putin's moves, and acknowledge these days are echoing the Cold War diplomatic tit-for-tats of the 1980s.

DANIEL FRIED, Atlantic Council: He wants to have a Cold War-type relationship? Let's remind him how this ended up.

DANIEL FRIED: If the Russians are messing with us and trying a playbook from the Cold War, then, in general and without prejudice, let's implement those new sanctions with vigor. Let's lean forward and let's mean it.

NICK SCHIFRIN: But that is exactly the kind of response that Russians fear will exacerbate a conflict that's increasingly dangerous and increasingly poisoned by the U.S.-Russia investigation.

NICK SCHIFRIN: And that is something that neither side wanted, but looks increasingly inevitable.