It all follows reports that Pyongyang can now make nuclear weapons small enough to fit inside a long-range missile.

REX TILLERSON, U.S. Secretary of State: I think Americans should sleep well at night, have no concerns about this particular rhetoric of the last few days. What the president is doing is sending a strong message to North Korea in language that Kim Jong-un would understand.

JOHN YANG: Tillerson spoke on his way to the U.S. territory that's home to the B-1 bombers that have been flying training missions over the Korean Peninsula, drawing North Korea's ire.

WOMAN (through interpreter): The Korean people's army is now carefully examining the plan for making an all-consuming fire at the areas around Guam with a medium-to-long-range strategic ballistic rocket in order to contain the U.S. major military bases on Guam.

JOHN YANG: Defense Secretary Jim Mattis warned Pyongyang to stop "consideration of actions that would lead to the destruction of its people."

PRESIDENT DONALD TRUMP: They will be met with fire and fury and, frankly, power, the likes of which the world has never seen before.

BAIK TAE-HYUN, Spokesman, South Korean Unification Ministry (through interpreter): These kinds of comments by North Korea do not help in the relationship of South and North Korea. 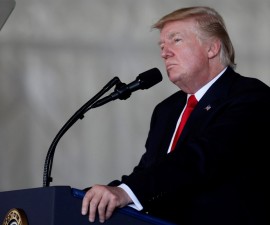 JOHN YANG: But, in Japan, the chief cabinet secretary welcomed the American muscle-flexing.

YOSHIHIDE SUGA, Chief Cabinet Secretary, Japan (through interpreter): The United States have said all options are on the table. The Japanese government supports this attitude.

JOHN YANG: President Trump said this morning that he had ordered a modernization of the nation's nuclear arsenal: "It is now far stronger and more powerful than ever before. Hopefully, we will never have to use this power."

While Mr. Trump did order a review of the country's nuclear capability during his first week in office, it was President Barack Obama who began a $1 trillion modernization of the arsenal. It's barely begun and will take decades to complete.

The Trump administration has seemed to send a variety of signals about its approach to Pyongyang. Mr. Trump had called on China to pressure its renegade neighbor. But after missile tests last month, he seemed to give up on Beijing.

PRESIDENT DONALD TRUMP: We will handle North Korea. We're going to be able to handle them. It will be — it will be handled. We handle everything.

MIKE POMPEO, CIA Director: The thing that is most dangerous about it is the character who holds the control over them today. So from the administration's perspective, the most important thing we can do is separate those two.

JOHN YANG: Amid a New York Times report that Mr. Trump's fire and fury threat caught his aides by surprise, White House Press Secretary Sarah Huckabee Sanders said, "The tone and strength of the message were discussed beforehand, if not the exact words."

SEN. LINDSEY GRAHAM, R-S.C.: President Trump has basically drawn a red line, saying that he will never allow North Korea to have an ICBM missile that can hit America with a nuclear weapon on top. But if there's going to be a war, it's going to be in the region, not here in America.

JOHN YANG: A prospect that is sending a shudder through Asia and the world.