MILES O'BRIEN: For another view on the soggy ground in Texas, I spoke a short time ago to Congresswoman Sheila Jackson Lee, a Democrat. She has represented downtown Houston for more than two decades. The congresswoman has not been able to access her own home due to flooding in the area.

She joins us from the George R. Brown Convention Center in Houston.

Thanks very much for being with us, Congresswoman.

I know you have been in your district for the day, and I know you are personally affected by this. If you can just paint the scene for me, what are you seeing among your constituents right now?

REP. SHEILA JACKSON LEE, D- Texas: Well, I'm seeing a lot. I just came back in from the northeast part of high district, rescuing about 50 people, including elderly that were frail, babies and moms and others that were disabled, but these were resilient people who are waiting and really said, we will wait it out. We will stay here in this place with no real food and no real resources.

They had taken cover, if you will, in a place in the neighborhood. A lot of people are doing that. They are seeking their own refuge, but a lot of people are volunteering and being the good samaritans. At the same time, we're working closely with local governments, the mayor and county judge.

And I'm here on the federal resources. FEMA at this center we have, this very, very popular center, if you will, the George R. Brown Convention Center, the shelter that is here, we just got FEMA coming in to work with people on their losses. We have got a full medical center established.

And we're trying to restore people's lives. But we do need and will need federal resources. And I'm looking for a bipartisan approach to making sure we get those monies to restore the lives of Houstonians and those in South Texas and all over the state that have been impacted and still being impacted by Hurricane Harvey.

MILES O'BRIEN: What will you be asking for from Washington and from your fellow members of Congress? 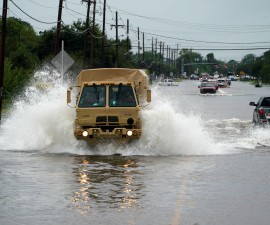 REP. SHEILA JACKSON LEE: We're planning on introducing an aid package that we hope will be joined by Republicans and Democrats that will comprehensively look at the housing.

We believe that there will be a major impact on people who will be able to go back to their housing at this time. We realize that there are homes that are now sitting with water. This is the most catastrophic event that we have had in Houston, in Harris County, bar none, bar Alicia and Allison.

The water is pounding. So, we're going to have to restore a lot of housing. Our infrastructure has to be restored, our water retention. All of that will be part of an aid package. And I hope that we will not only have the leadership of the Congress, but the White House will understand that a large economic piece of the nation has been severely impacted. I heard someone from FEMA say this will take months for restoration and maybe even years.

MILES O'BRIEN: Of course, the politics here in Washington is the possibility maybe of a government shutdown. In the context of what's happening in Houston, what do you say to that?

REP. SHEILA JACKSON LEE: Well, this is a busy place. And I'm trying to get people rescued. But I intend to send a letter to the president of the United States and emphasize to him that this is the worst time that a government shutdown could occur.

I watched them carefully lift up the elderly and the sick and the frail and young mothers and families. That's what I needed the president to do. He should come here with a message unity and a message of thanks for all of these people who have sacrificed, who are out there with their own boats helping. And he should come with a message of a dollar sign, that he's going to go back, keep the government open, and help us get back on our feet.

MILES O'BRIEN: Is there a sense of desperation in your district?

REP. SHEILA JACKSON LEE: I will say to you that this is beyond our even appreciation or understanding. We're in an ocean.

So, people, rightly so, are mourning and concerned about their lives. They have been disrupted. But they're welcoming of help. And I don't think despair has set in at this point, but I think they're looking for those who are going to be held accountable and get us back on our feet. Despair comes when you think no one is out caring about you.

MILES O'BRIEN: Congresswoman Sheila Jackson Lee, thank you very much. We will let you get back to it.

REP. SHEILA JACKSON LEE: I thank you so very much.

And I thank all the volunteers who have come in, some across the nation. And we need help, so please send us help. A lot of items here, whatever you have, bring them down to the George R. Brown Convention Center in Houston, Texas.

Thank you so very much.