A record-breaking hurricane is causing death and destruction as it passes through the Caribbean and heads towards the U.S. state of Florida. On Thursday, Hurricane Irma caused major devastation across the Caribbean islands of Barbuda, St. Martin, Anguilla and the British Virgin Islands. The Prime Minister of Barbuda, Gaston Browne, said about 95 per cent of the buildings on the island had suffered some damage. He said: "It's absolute devastation. The island is literally under water….Barbuda is barely habitable." A government official for St Martin said: "There is massive destruction. We'll concentrate our first efforts so that in the next hours people can get access to food and drinking water." 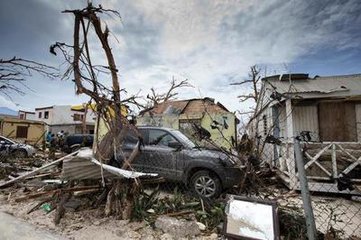 Hurricane Irma is a category 5 storm – the strongest on the 1-5 scale of hurricanes. It is the second strongest hurricane ever to be recorded and the strongest ever recorded east of the Caribbean Sea. Irma has kept a wind speed close to 300kph for more than 24 hours. This is the longest period ever recorded. Meteorologists said Hurricane Irma was over 1,200km wide. It is likely to become a Category 4 hurricane when it makes landfall in Florida on Saturday morning. Florida officials have already ordered a mandatory evacuation of Florida Keys - the southern part of the state of Florida. Residents there are bracing themselves for winds of up to 300kph and massive and damaging storm surges.