Archaeologists in Egypt have found a tomb that has three mummies inside it. The ancient tomb is over 3,500 years old. It contains the mummified bodies of a woman and her two sons. Archaeologists say the tomb belonged to a royal goldsmith called Amenemhat and that the woman may be his wife. There was a statue of the goldsmith, sitting beside the woman. The tomb was found near the city of Luxor on the River Nile. Luxor is about 700km south of Egypt's capital city Cairo. Archaeologists say the woman was about 50 years old when she died. Tests show that she died because she had a bone disease. Her two sons were in their 20s and 30s. All three bodies were in very good condition. 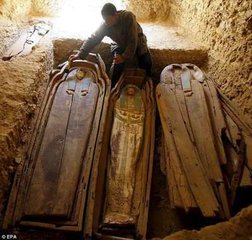 The site that contains Amenemhat's tomb consists of a courtyard and two burial shafts. It was discovered by an Egyptian archaeological team from Luxor Antiquities. The latest discovery came after six years of digging on the site. Dr Yousef Khalifa, Egypt's former head of antiquities, told Arab News: "Luxor alone has one-third of the world's ancient monuments and visitors will enjoy exploring the newly found ancient Egyptian relics." Dr Khalifa hopes the new discoveries will help Egypt's tourism industry. He said many tourists will come to see the new mummies. Current head of antiquities, Dr Khaled al-Anani, hopes archaeologists will find more mummies in the area.