JUDY WOODRUFF: In another major story today: An earthquake shook Central Mexico, knocking down buildings and killing at least 61 people. The quake measured 7.1 and was centered about 75 miles southeast of Mexico City.

Richard Ensor is the Mexico City bureau chief for The Economist magazine. We spoke just a short time ago by telephone.

Richard Ensor, thank you very much for talking with us.

What are you seeing? What is the very latest from Mexico City?

RICHARD ENSOR, The Economist: Well, I'm just outside of Mexico City in a town called... which is much closer to where the epicenter of this earthquake was.

And there are collapsed buildings. There are rescue operations under way. I'm currently outside one right now. And there's a lot of activity. There's a tall building where the dome of the building has fallen off and then crushed a bus.

And it seems that people — nobody seems to know whether there are going to be any people inside the building. But it's a very, very somber occasion. And this area is incredibly shocked, especially after having... 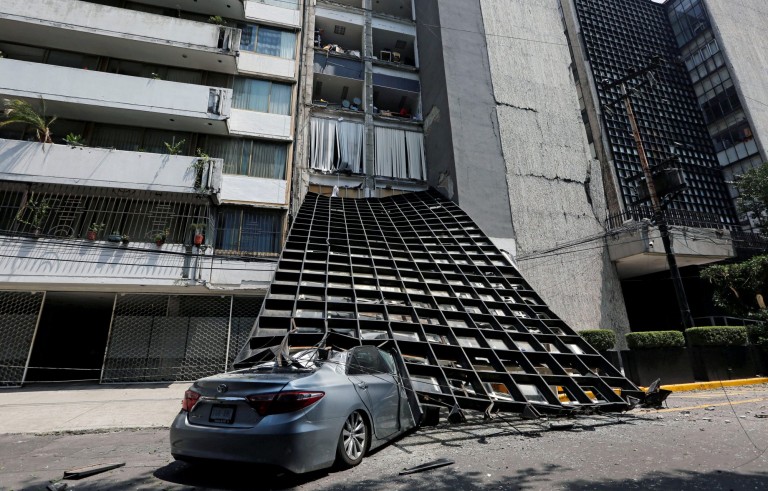 JUDY WOODRUFF: We know this is a very populated area, of course, Mexico City itself and the area around it. What did you feel?

RICHARD ENSOR: So, I felt this impact a lot stronger than I did the previous one, even though... a 7.1, the magnitude, from the 8.2 two weeks ago.

I saw — I was in a place with a pool, with a swimming pool. And I saw the swimming pool splashing around and moving from side to side. The buildings were... loudly and, of course, the students in the school were incredibly scared.

JUDY WOODRUFF: We're seeing images of people in the streets looking pretty frightened. How are people handling this right now? And do you — is the country prepared in any way to deal with this crisis?

RICHARD ENSOR: Well, this one is going to hit some of the population centers like Mexico City a lot harder than the previous earthquake did, because the epicenter is so close.

There are areas in Mexico City that are built on very shallow and soft ground, so the buildings are prone to coming down very easily. One of the things that was commented on after the previous earthquake was that a lot had been earned since the horrible earthquake in 1985, which killed 10,000 people, and that a lot of lessons about building regulations and emergency response had been learned.

This is a stronger earthquake. So, we will have a real test of how the country's emergency services hold up. I know that President Pena has been very active on social media, putting out information and drawing together a national plan of action.

On the ground here, in Morelos, the epicenter of the quake, the local services are working as hard as they can to find any survivors in the rubble as well.

JUDY WOODRUFF: Richard Ensor, the Mexico City bureau chief for The Economist magazine, thank you very much, and we wish you the best.