JUDY WOODRUFF: And now to Hurricane Maria. The confirmed death toll across the Caribbean rose to 19 today, nearly all of them on the island of Dominica. Reports also began coming in of widespread damage on Puerto Rico, after it took an all-day pounding on Wednesday.

John Yang has that story.

JOHN YANG: Across Puerto Rico today, more rain. In some spots, as much as three feet is forecast to fall by Friday. Flood warnings cover the entire island.

Parts of San Juan were under several feet of water after the storm surge rushed in. Residents emerged from an overnight curfew to face the first clear view of the devastation: clothes and belongings strewn about, trees and power lines downed, red tile roofs splayed across streets.

PATRICK GEORGE, San Juan Resident (through interpreter): Eighty-five percent of the houses are gone in the neighborhood.

JOHN YANG: Hardest hit, Puerto Rico's smaller coastal towns, like Guayama, near where Maria made landfall. It's lost all communications.

PRESIDENT DONALD TRUMP: Puerto Rico is in very, very, very tough shape. Their electrical grid is destroyed. So we're starting the process now, and we will work with the governor and the people of Puerto Rico. 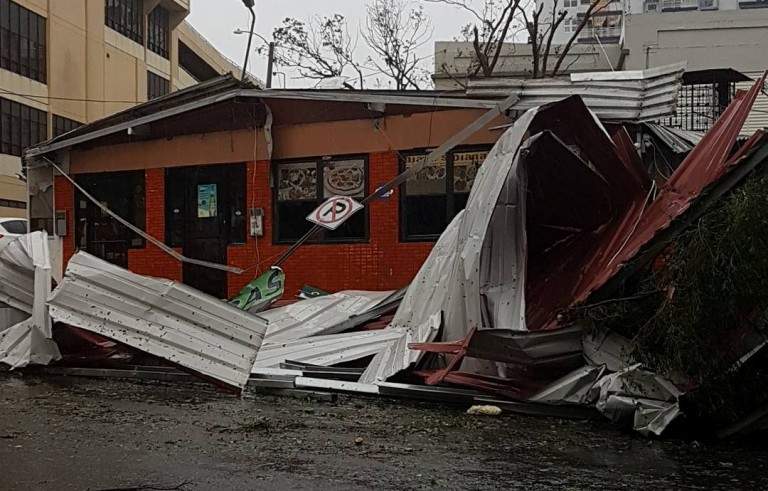 JOHN YANG: Governor Ricardo Rossello met with FEMA officials, already spread thin by a series of powerful storms, to discuss a recovery plan. He warned it will take months to repair the island's long-neglected electrical grid and restore power.

To the east, word of even worse devastation on tiny Dominica, where British aid and military teams landed today. Officials say 95 percent of the buildings are damaged.

ROOSEVELT SKERRIT, Prime Minister, Dominica: Every village in Dominica, every street, every cranny, every person in Dominica was impacted by the hurricane. We have no running water now. We have no electricity, no power.

The storm is forecast to reach Turks and Caicos overnight, then pass the Eastern Bahamas by Saturday morning. But a sharp turn to the north will take it toward the open Atlantic by Monday. As of now, Maria is not expected to pose a direct threat to the U.S. mainland, having already ravaged U.S. territories in the Caribbean.