A new hotel in Taiwan has opened to cater to the needs of gamers. Those who want to indulge in their favourite games while on business or vacation can now do so at the iHotel, near Taiwan's capital Taipei. Rooms at the hotel are fully equipped with two state-of-the-art gaming computers with 32-inch screens, plush DXRacer gaming chairs, and ambient lighting to create the perfect mood for getting behind the joystick. The gaming computers are side-by-side to ensure gaming with your partner has a more competitive edge. The rooms are also furnished with a 46-inch TV for guests to chill out after a hard session gaming. And if that's not enough, the hotel's lobby features a large gaming arena for larger groups. 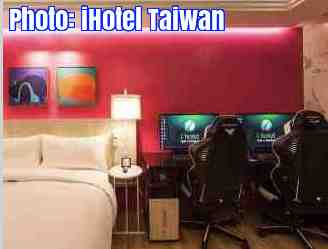 Putting gaming consoles in hotel rooms may lead to positive benefits besides relaxing and getting away from it all. One study analysed data from over 12,000 high school students in Australia. Researchers found that students who played online games almost every day scored 15 points above average in maths and reading tests and 17 points above average in science. A Columbia University study indicated that gaming by 6-to-11-year-olds greatly increased their chance of "high intellectual functioning and overall school competence". However, critics of gaming warn of the harmful effects of gaming because of depictions of violence, sexual themes, alcohol, tobacco, drugs and profanity.