U.K. police have said a man who put a bomb on a London subway train bought most of the parts for the bomb online. Police have accused an 18-year-old Iraqi refugee of planting the bomb on a busy commuter train on September 15. The bomber left his device on a packed subway carriage during the peak rush hour. The bomb exploded at Parsons Green subway station at 8.20am. It caused burns to the face and body of 30 passengers. Police said there would have been more casualties if the bomb had worked properly. It didn't detonate fully so there was less harm to humans than there could have been. Police said the bomb contained, "knives, screws, glass and similar items to increase the likelihood of death". 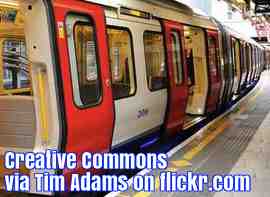 The bomber bought many of the ingredients for his device from the online shopping site Amazon. One of these ingredients was several hundred grams of an explosive called TATP. This is also called "Mother of Satan" because it is so powerful. Police said the bomber used it to create "maximum destruction". Reporters later checked Amazon for the ingredients and were shocked to find that the site directed them to other things that could be used to make bombs, in the "items frequently bought together" tab. Amazon said it will work to stop this happening. It said: "In light of recent events, we are reviewing our website to ensure that all these products are presented in an appropriate way."