A new law in Austria means there is now a ban on full-face veils. This means Muslim women will not be allowed to wear a full-face veil in public in the country. The new law says faces must be visible from the hairline to the chin. The government said the law is to protect traditional Austrian values. The law bans Muslim veils such as the burka or niqab. Muslim groups have said the law is very unfair because it goes against human rights and religious freedom. They say that just a tiny minority of Austrian Muslims wears full-face veils. They put the number at around 150. Officials say the law will damage Austria's economy. They say many Muslim tourists will decide not to visit Austria. 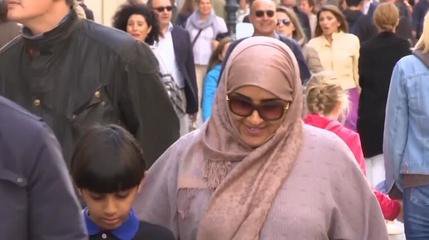 Austria is the third European country to ban the wearing of the veil. France and Belgium introduced similar bans in 2011. Other countries in Europe could follow. The Dutch government is currently working on passing a ban and German Chancellor Angela Merkel has said that the full-face veil should be banned in Germany "wherever it is legally possible". Carla Amina Bhagajati of the Islamic Religious Community in Austria talked about how unfair the new law is. She said the "handful" of fully veiled women in Austria are now "criminalized" and "restricted to their homes". A supporter of the ban Emma Schwaiger said: "It's not right that those living here don't show their faces."