A general strike in Spain's region of Catalonia on Tuesday brought large parts of Barcelona and other cities to a standstill. Thousands of Catalans rallied and blocked roads to protest over Spanish police violence during Sunday's independence referendum. Nearly 900 people were injured at the weekend in a crackdown against voters and referendum staff. The Spanish government declared that the referendum was illegal and ordered the police to break it up. Spain's King Felipe VI has condemned the organizers of the referendum. In a televised address to the nation, he said they had put themselves "outside the law". He said the situation in Catalonia was "extremely serious" and called for national unity. 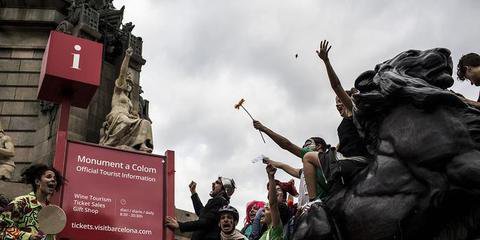 The mayor of Barcelona told reporters that the Catalan people deserved to have a vote on independence. She said: "What we need is a democratic response. And we need a political solution. And we need an inclusive solution that listens to the cries of millions of people." She also called for the resignation of Spain's prime minister. More unrest could be on the cards. Any declaration of independence by the Catalans could plunge Spain into a further constitutional crisis and risk the break-up of the country. Other regions could follow Catalonia's example and have their own referendum. Spain's president has called on the international community to help mediate between the two sides.