The 2017 Nobel Prize in chemistry has gone to three scientists for their work on photographing molecules. Professors Jacques Dubochet, Joachim Frank and Richard Henderson will share the $1,090,000 prize. They developed a special way of taking photos of molecules. Molecules are the very smallest building blocks that make up the cells in our body. Everything and everyone is made of molecules. The three chemists developed a technique called cryo-electron microscopy (cryo-EM). This allows scientists to zoom in to amazing new levels. Scientists can now see things in our bodies that we have never seen before. They can see how the building blocks of life move. 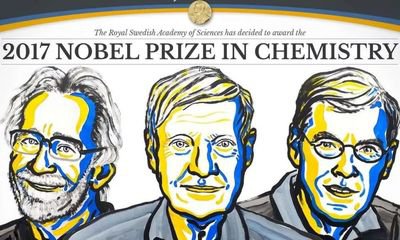 The Nobel Prize committee said the new cryo-EM technique will change science forever. It said the technique has "moved biochemistry into a new era". The Nobel chairperson said: "Soon, there will be no more secrets. Now we can see the intricate details of the biomolecules in every corner of our cells and every drop of our body fluids. We can understand how they are built and how they act and how they work together in large communities. We are facing a revolution in biochemistry." Professor Frank said the practical uses for the technique were "immense". Cryo-EM will mean scientists can look at the building blocks of viruses. This means we will find cures for many diseases.