There is bad news for students who like to use their mobile phones while they study. New research shows that students do not learn very well when they are texting and checking their social media accounts. The research is called: "Mobile Phones in the Classroom: Examining the Effects of Texting, Twitter, and Message Content on Student Learning". Researchers looked at 145 American university students in the classroom. Some of the students used their mobile phones during class, while the others had their phones switched off. The head researcher, Dr Jeffrey Kuznekoff, said students who did not use their mobile phones while the teacher was talking got higher scores on tests they took at the end of the class. 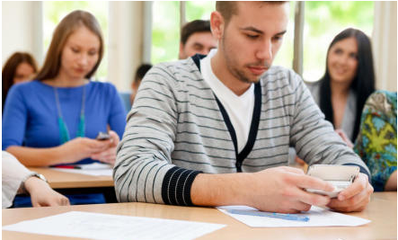 Kuznekoff said that one of the biggest challenges teachers have in the classroom is the non-stop battle of keeping students working. He said many students felt they needed to be online and checking messages even when they had important work to do in class. The researchers said it is very common for students to be physically present in class, but mentally absent because they are using their mobiles. Kuznekoff said teachers were fighting a "losing battle" because students were more interested in social media than learning. The London School of Economics did a study in England and found that test scores increased by six per cent after mobile phones were banned in class.