Three Chinese women were left stranded at a South Korean airport after immigration officials said their passport photos did not match their faces. The women had just had cosmetic surgery to change their looks. The surgery had transformed their faces to such an extent that passport control officials in South Korea could not confirm theiridentity. Photos of the women went viral on the Internet. Their faces were swollen from the surgery and were heavily bandaged. The Shanghaiist.com website reported that the women were not allowed to take their return flight back to China, and were instead held for questioning by the airport authorities. It is still unclear if the women have been able to return to China. 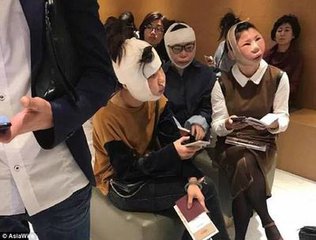 South Korea has become the cosmetic surgery capital of the world. Cosmetic surgery tourism from China is now booming business. More than 500,000 Chinese residents a year flock to clinics in South Korea to reshape their faces and bodies. Many of them go to clinics that specialize in making clients look more "Western". Cosmetic surgery is also hugely popular with South Koreans. Around half of women under 30 in the capital Seoul are estimated to have had surgery. Many parents encourage their children to undergo surgery in efforts to gain a "competitive edge" in the job market. There are even hugely popular prime time TV shows that feature before and after transformations.